While many resource companies found their work stalling in 2020 due to the pandemic, others have managed to  explore new ventures, and even ramp up productivity. Case in point: Toronto-based Royal Nickel Corporation (TSX:RNC) officially announced its rebranding as Karora Resources Inc. in mid-2020 (TSX:KRR and KRR.WT). This evolution was several years in the making, as RNC transitioned from being primarily a nickel producer to a gold producer. In an effort to divest nickel assets and garner some fresh capital for gold exploration projects, Karora sold its 28% stake in the world-class Dumont Nickel Project in Quebec to Waterton Global Resource Management Inc., while retaining the right to 15% of any revenue arising from future sales of the project.

Prior to its transformation, RNC owned gold asset Beta Hunt, which is located near its former nickel holdings in Western Australia. In 2020 RNC expanded to acquire another large property in Western Australia: the 1800 km2 Higginsville Gold Operations (HGO), which includes its own processing facility. In-house processing of gold ore will allow the company to recoup a significant amount of its mining costs. Additionally, the newly minted Karora Resources Inc. secured a new high-grade gold project in Western Australia, Spargos, which is set to break ground this year.

Karora’s current operations are the Beta Hunt underground mine and the Higginsville Gold Operations (HGO) in Western Australia. Between December 2016 to December 2020, Beta Hunt produced 2234 kt gold, and 76 kt nickel. Proven and probable gold mineral reserves at Beta Hunt are 482 Koz (average grade of 2.6 g/t). Indicated nickel resources are 561 Kt (average grade of 2.9% Ni). Production at Beta Hunt is expected to end in 2026.

In March 2021, Karora concluded their drill program at the 33 km2 Spargos Reward gold project, which characterized high-grade gold mineralization (up to 8.6g/t) within 100 meters (m) of surface along a 400m strike length, potentially doubling previous resource estimates. The mapped extension of the gold mineralization to greater depth indicates potential to convert the Spargos project from open-pit to underground operation – extending the future life of mine. Resource and reserve estimates for the Spargos project will be completed before mid-2021, with production scheduled to begin in the latter half of this year.

Both the Beta Hunt and Higginsville deposits are located within the Kambalda-St Ives region of the Norseman-Wiluna Archaean greenstone belt in the Yilgarn Craton, Western Australia (Figs.1 and 2). The greenstone belt is made of regionally extensive volcano-sedimentary packages that were extruded and deposited in a regionally extensional environment from 2.81 – 2.66 Ga.

Gold mineralization in this region occurs in two forms:

The greenstone-hosted deposits at this location are world-class, comprising 13.1% of global gold content (production and reserves). Archaean greenstone belts are terranes characterized by shearing and metamorphism of ancient crustal materials (mafic1 and ultramafic2 igneous and sedimentary rocks) during the collision of island arc terranes to form mountain belts. While the tectonic processes that produced Archean greenstone belts have no direct modern analog, the collision of the Pacific and Philippine plates in the island arc of Japan is similar. Greenstone terranes are so named due to the predominance of mafic/ultramafic minerals (e.g. olivine and clinopyroxene) and their metamorphic counterparts (e.g. chlorite) which are green in colour. Greenstone belts are commonly associated with gold and nickel deposits.

The deposits are hosted by metamorphosed mafic-to-ultramafic lava flows and intrusions that have undergone metamorphism from sub-greenschist to upper greenschist and amphibolite facies. Ore mineralization occurs in subvertical shear zones in quartz and carbonate veins and is also known as lode gold (Fig. 3 and Fig. 4). The shear zones are part of the regional Wiluna strike-slip fault system which trends NNW-SSE (Fig.1 and Fig. 3).

A significant proportion of Higginsville deposits are hosted in meta-sedimentary rocks derived from ancient river channels and sand dunes, also known as placer deposits (Fig. 5). These paleo-channels overlie the primary Archean greenstone deposits and bedrock from which their source sediment (and ore) was derived. Mineralized zones in these deposits formed from the deposition, remobilisation and concentration of primary ore by sedimentary processes and later hydrothermal metamorphism. Paleo-channel orientation is largely controlled by the major fault zones in the region. The major fault zones run from NNW- SSE and are parallel to the intersections between different rock types. Gold mineralization is concentrated in areas where sands and gravels were deposited at river junctions. These sites commonly contain nugget-sized gold grains.

The Archaean deposit package does not appear at the surface and is overlain by younger (Tertiary/Quaternary) sedimentary deposits. Mineralization in the HGO is complex, occurring in seven distinct geological domains, each with their own deposit characteristics: Trident line-of-lode, Chalice, Lake Cowan, Southern Paleochannels, Mount Henry, Polar Bear Group, and Spargos Project Area.

The Beta Hunt deposit hosts both gold and nickel ores and was initially discovered as a nickel ore deposit in 1966. Since then, Beta Hunt has been the site of nickel mining operations. It was not until 2013 that gold resource development and extraction began. The project area is located north of the Higginsville gold operations and consists of an underground mine. Gold mineralization occurs mainly in near-vertical shear zones, most notably in the Lunnon Basalt. It is characterized by shear and extensional quartz veining within a halo of biotite/albite/pyrite alteration.

Within these shear zones, coarse gold sometimes occurs where the shear zones intersect iron-rich, sulphidic metasediments in the Lunnon Basalt or nickel sulphides at the base of the Kambalda Komatiite4. Principal deposits include the A Zone and Western Flanks, which is named after the shear zones that crosscut the Lunnon Basalt. The gold ore is processed locally, 80 km south of the mine at Karora’s Higginsville processing facility.

Nickel mineralization occurs in sulphidic ore and is hosted by altered talc-carbonate and serpentine altered ultramafic rocks (specifically the Kambalda Komatiite) which overlie the Lunnon Basalt. The nickel ore is sold to BHP and is processed north of the project site.

Karora has ambitious plans for 2021, having increased its exploration budget by 33% and its production targets by 21% compared to 2020.

1 Mafic: Portmanteau of magnesium and iron (ferric/ferrous). It denotes a rock comprising magnesium and/iron oxides and silicate minerals, and less than 52 % silica.

4 Komatiite: Mantle-derived volcanic rock of an ultramafic character, of which most only erupted during the Archaean. 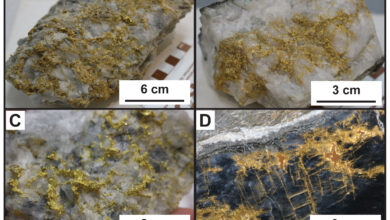