Five-element (silver (Ag) – cobalt (Co) – nickel (Ni) – bismuth (Bi) – arsenic (As)) vein deposits have been mined for centuries, and have been significant sources of high-grade Ag, Co, and Bi. Despite this history, we have only recently begun to understand how, where, and why they form.

What are 5 Element Veins?

Five-element veins are typically defined as Ag-Co-Ni-Bi-As bearing veins systems, this assemblage of metals, however, is only the most common. One, or several, of these typical elements may be missing, and elements such as uranium (U), copper (Cu), lead (Pb), zinc (Zn), antimony (Sb), mercury (Hg) and others may also be present. Even within districts the metal content of individual veins and deposits may vary significantly. Carbonates such as calcite and siderite are the most common gangue (non-economic) minerals, although barite, quartz and fluorite may also be present. Ore grades are variable but can be extremely high (up to 10% Co and 1000’s g/t Ag); tonnage is generally low (<1 Mt).

Elements such as Ag, Bi, and to a certain extent As, occur as native elements, while nickel and cobalt occur as arsenides and/or sulfides. Many of these minerals show unusual textures such as being drawn out into thin wires or fern-shaped dendrites. Native Ag and Bi, in particular, sometimes form beautiful, delicate branching aggregates which are highly prized by museums and mineral collectors. Ore deposition generally seems to have followed a complex pattern of early sulfides followed by native elements, with or without arsenides, then arsenides and sulfides, and finally gangue minerals. Very high-grade and relatively large (meters to tens of meters) ore shoots may occur where vein/fault systems intersect.

Five-element veins are unusual for a number of reasons. Even the typical Ni-Co-As-Ag-Bi assemblage is odd; Ni and Co have similar properties and are commonly found together, but Ag is more typically found with Cu and Au, which are relatively rare in 5-element veins. Arsenic turns up in many deposits, sometimes bound with Ni and Co, but rarely in the amount and purity found in these veins. Bismuth rarely forms deposits except for high-temperature veins related to certain granites. Uranium, a major ore metal in the Port Radium and a few other 5-element districts, has very different chemical behavior than most base and precious metals, and is rarely found with them except in certain unconformity-related and Iron-Oxide-Copper-Gold (IOCG) deposits. Simply put, these elements have different chemical properties and aren’t normally found in the same environment; it’s difficult to imagine how large amounts of them could be deposited from the same ore-forming fluid at the same time.

The mineral textures of 5-element veins are also strange. Minerals typically grow slowly, forming regular crystals or massive aggregates, but the spectacular dendrites sometimes found in 5-element veins are only possible if minerals were deposited in the geologic blink of an eye, perhaps as little as a few hours. The occurrence of Ag, Bi, and As as native elements is also rather uncommon.

On a larger scale, even the type of environment 5-element veins form in is uncertain. These veins are known to form in almost any rock-type. Most seem to be related to fluids released from igneous intrusions, but vein deposits in the Port Radium area appear to be related to the late stages of IOCG deposits. Some deposits may have formed at least partially from metals remobilized from older, unrelated deposits.

Part of the problem is that 5-element veins are not well studied; only in the last four or five years have promising theories centering on methane begun to provide some answers. The theory goes that 5-element systems form when ‘common’ metal-bearing vein systems are suddenly cut by newly formed fractures, perhaps created by earthquakes, which contained methane-rich fluids. The violent mixing of two fluids with very different temperature, pressure, and chemistry would cause very rapid deposition of minerals and native metals. The addition of methane would trigger redox reactions causing deposition of redox-sensitive elements such as Ag, Bi, As, and U. Metals that readily bond with As, like Ni and Co, would be deposited preferentially over metals which don’t, such as Cu and Zn. Eventually, the input of methane would cease, and the vein system would return to more normal conditions and the deposition of more common sulfide and arsenide minerals. This would potentially explain the unusual mineralogy and mineral textures, as well as why particularly large, high-grade ore shoots form where veins intersect other vein or fault systems.

Five-element veins have been mined since at least medieval times, when their high grades of easily recognized and refined native Ag made them a relatively accessible source of the precious metal. Silver has typically been the main economic element, with byproduct Co, Ni, Bi and other elements depending on the nature of the specific deposit. Deposits in the Port Radium area of northern Canada are an exception, as their unusually high U content made them an important source of U before the discovery of much larger and more varied U deposits in the 1960’s and onwards. Radium, a highly radioactive element produced by the radioactive decay of U, produced from these deposits was widely marketed as a health tonic during the early 20th century before the harmful effects of radiation were well understood. Ironically, the high cost of these tonics meant that only the very rich could afford to drink enough to cause serious harm.

The economic importance of 5-element veins has declined to near non-existence since the latter half of the 20th century. Relatively small tonnages and erratic shapes and grades of ore bodies makes these deposits difficult to efficiently mine via modern large scale, mechanized methods. This problem is compounded by the relatively low price of Ag, which is now largely produced as a byproduct of Cu and Au mining. Although 5-element veins are rich sources of rare Bi, use of this metal is relatively limited, and demand is largely met as a byproduct of Pb and Zn mining. The high content of toxic As in these ores may also pose tailings management and environmental issues.

The push to develop new sources of Co, however, may provide a reason for optimism. High-grade Co deposits are extremely rare; Bou Azzer, Morocco is currently the only mine in the world producing it as the primary commodity. The origin of this deposit is controversial, with some evidence in favour of a 5-element model, and some suggesting a more unusual process, likely related to hydrothermal leaching of the unusual ophiolite rocks in the area, is at work.

The Cobalt, Ontario, area, has received a considerable amount of exploration interest in recent years from companies such as Fuse Cobalt and Canada Silver Cobalt Works. Despite its’ name, Cobalt was built on silver: its discovery in 1903 prompted a silver rush with ended up being more lucrative than the Klondike gold rush. Five-element veins in the area are related to a large, 2.2-billion-year-old diabase dyke, which spawned many small, high-grade veins. The aptly named Little Silver Vein, for instance, averaged only 20 cm wide but produced 700 000 Oz Ag from primitive underground workings. The role of methane in the area has yet to be investigated. Cobalt ultimately produced 460 Moz Ag and many millions lbs of Co before mining ceased in the 1970’s due to low Ag and Co prices, the town is still home to North America’s only Co refinery.

A better understanding of how and where 5-element veins form may also increase exploration, and perhaps mining, success. If the methane theory proves to be correct it would suggest areas with both igneous-derived fluids and potentially methane-forming carbon, or sulfide rich rocks are prospective. On a smaller scale, crosscutting vein/fault systems may host rich ore shoots.

Five-element veins are a historically important source of Ag and Co, but mining has become difficult in modern times due to low tonnages and a lack of geologic understanding to guide exploration. While their economic importance has waned significantly, recent advances in understanding their geology and increasing interest in developing new sources of Co may reverse this over the coming years. 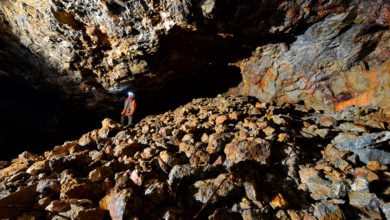 Pegmatites – Our Greatest Source of Gemstones