The Bushveld Complex (BC), located in northern South Africa, is a Paleoproterozoic Large Igneous Province ~2 Ga in age. It is the world’s largest layered mafic intrusion and boasts the highest concentration of Platinum Group Elements (PGE). The Bushveld Complex contains 75%, 54%, and 82% of global Platinum, Palladium, and Rhodium resources respectively, as well as vast reserves of Chromium, Vanadium, Tin, Nickel, Copper, and Cobalt. The PGE resources in the BC are such that even after 100 years of mining, 6.8 billion ounces of Platinum remain. At current rates of extraction, the complex will not be mined out for the next 700 years.

Mining of the BC occurs as both underground and open pit operations, with extraction taking place from 1-5 km depth. Much of the deeper ore is still intact. Open pit mining is carried out using the truck and shovel method. Underground mining occurs via the conventional room and pillar and breast mining methods with various levels of mechanization. The recovered ore is hauled by truck to local concentrator plants for processing.

There are over 30 active mining operations and projects in the BC, shown in Fig. 1. Primary mine ownership is dominated by the South African companies AngloAmerican Platinum (JSE: AMS) and Impala Platinum (JSE: IMP). Other mining companies operating in the BC include African Rainbow Minerals (JSE: ARI); Northam Platinum (JSE: NHM); Sibanye Stillwater (JSE: SSW NYSW: SBSW); and Bushveld Minerals (LSE: AIM).

Anglo American Platinum has three mining operations in the Bushveld Complex: Mogalakwena Mine; Amandelbult Complex (which includes Dishaba and Tumela mines); and Mototolo Mine. The company also has mining rights over the Twickenham Project area, and Der Brochen, adjacent to Mototolo. AngloAmerican Platinum produces up to 39% of the world’s platinum.

Impala Platinum has three mining operations in the BC: Impala, Marula, and Two Rivers.

All mines listed have project lives of more than 15 years as of 2020.

Large Igneous Provinces (LIP) such as the Bushveld Complex are defined as massive emplacements of predominantly mafic lavas/magmas via processes other than typical seafloor spreading. Emplacement of an LIP occurs over a period of less than 10 million years.

The BC intrudes into the metasedimentary country rock of the Pretoria Group (2.1 – 2.3 Ga) within the Transvaal Supergroup (Fig. 1). The Pretoria Group is characterized as a post-rift sedimentary basin environment comprising shales, conglomerates, quartzites, and minor mafic volcanics.

The precise mechanisms of formation of the BC remain a subject of debate, as do the tectonic setting and causes of magmatism. Consensus leans towards a back-arc extensional setting in the southern region of the Kaapvaal Craton associated with orogenic collision to the north between the Kaapvaal and Zimbabwe Cratons.

Magmatism in the PGE-rich upper mantle, likely due to the presence of a mantle plume1, formed a variety of melts that rose to a staging chamber beneath the crust. In this extensional environment, feeder dykes exploited the dilating east-northeast trending Thabazimbi-Murchison Lineament (Fig. 1). The feeder dykes drained the staging chamber and pumped magma in the upper crust in cyclic pulses, producing felsic2 lavas, a mafic3 layered suite, and granitic plutons.

The BC contains several distinctive igneous suites that indicate successive phases of emplacement (Fig. 1 and 2). The process is described below:

Much of the rock comprising the Bushveld Complex has been eroded away. The remains crop out in lobes in the four cardinal directions. Economically significant zones are concentrated in the western, eastern, and northern lobes (Fig. 1 and 3).

The PGE deposits of the Bushveld Complex occur in the Rustenburg Layered Suite (RLS) (Figures 1 and 2). The RLS is vast: it covers an area of 66,000 km2, extending 450 km from east to west and 350 km north to south. Research estimates the volume of magma produced to form the RLS was on the order of 1 million km3. The RLS achieved this massive volume through successive emplacement of thin magmatic sills of various volumes and compositions. The PGE ore are located at the base of this layered intrusion. There is a lack of consensus regarding mechanisms controlling the concentration of PGE to form an economic deposit, but three essential components are agreed upon:

There are two main types of mineralization in the RLS:

Reef-type: Layered deposits less than 1 m thick that contain sulphide-hosted PGE in either mafic/ultramafic rock or chromitite. Chromitite is an igneous rock made of the mineral Chromite (FeCr2O4). In this context, a reef is a rock layer enriched in PGE minerals, and is unrelated to sedimentary coral reefs.

Contact-type: Heterogenous and diffused sulphide-hosted PGE deposits in mafic/ultramafic rock formed at the contact between the RLS and the country rock. Thickness ranges from < 50 m to 400 m.

The Merensky Reef has been the world’s most important platinum resource since extraction began in 1928. The Merensky Reef can be traced for more than 280 km around the complex. It ranges in thickness from 4 cm to 4 m, averaging around 1 m. The reef is composed of a pegmatoidal feldspathic pyroxenite (Fig. 6).

Two to four thin chromitite layers (1-2 cm thick) define the upper and lower limits of mineralisation within the Merensky Reef. The highest grades are associated with these chromitites (Fig. 6).

PGE-minerals (laurite, braggite, and cooperite) fill the space between the silicate minerals in the chromitites. The amount of PGE is inversely related to reef thickness, with the highest grades occurring where the reef is thinnest. The grade of the reef is extraordinarily consistent over great distances. However, the relative composition of the PGE is extremely variable from mine to mine.

In some places, sections of the Merensky Reef are missing. These missing sections of reef are called potholes and are thought to have formed when incoming magma fluxes eroded the reef. Potholes can cause ground instability and may interrupt normal mining of the reef.

The UG2 chromitite in the Upper Critical Zone is the largest known PGE resource on Earth. The 0.5-1 m thick reef occurs 15-400 m below the Merensky Reef, with vertical separation between the two reefs increasing from west to east. The UG2 comprises two to four minor chromitite reefs with a chromite content of approximately 43.5% (Fig. 7). The PGE minerals occur as metal sulphides interstitial to the chromite grains. Relative proportion of PGE varies with geographic location.

The Platreef in the northern lobe of the Bushveld Complex is predominantly a pyroxenitic package (mafic igneous rock dominated by the mineral pyroxene). The Platreef is heterogeneous and also includes cycles of the mafic rocks peridotite and norite. The Platreef is much thicker (but lower grade) than the Merensky Reef and UG2, and is currently mined open-pit over a thickness of about 50 m. Notably the Platreef has the highest Pd content of the three deposits, with a Palladium to Platinum ratio of one.

Because South Africa produces the bulk of global PGE, its ability to meet demand plays a significant role in the market price of PGE. The global drive to reduce CO2 emissions in the automotive industry supports strong demand for PGE to be used in hydrogen fuel cell technology. Despite substantial investment, supply has been on a downward trend since 2006 due to a lack of investment in deep-level mining on the western limb. Further investment decreased following the 2008 financial crash and extensive mine strikes in 2014. Production has yet to recover from these events.

The local mining industry is currently hampered by continual water shortages and constant electricity outages, which has negatively impacted the supply of PGE. Under these circumstances, the risk to the supply of PGE will put upward pressure on PGE prices. Current projections indicate that production will ramp up to meet 2006 supply levels by 2021.

The Bushveld Complex has the PGE resources to meet global demand. While economic projections indicate the investment cycle in the western limb is coming to an end, there are still numerous new projects in the eastern and northern limbs, boasting enormous reserves.

1Mantle Plume: A mantle plume is an upwelling of abnormally hot rock originating from the core-mantle boundary. As the plumes reach the base of the lithosphere, they flatten out and undergo decompression melting, forming large volumes of basaltic magma that are thought to feed large igneous provinces.

5Granophyre: Type of fine-grained granitic rock with a granophyric texture whereby quartz and alkali feldspar minerals are intergrown in a thread-like texture. 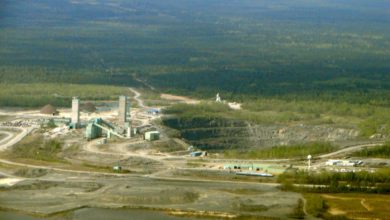 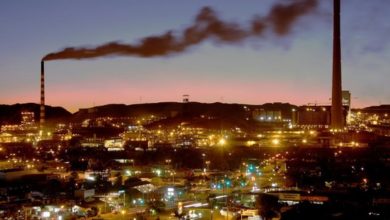