Many are familiar with the platinum group element and chromite-rich rock sequences, and vanadium magnetite layers of the Bushveld Igneous Complex, South Africa, which make up the world’s largest deposits of these elements. But few know that a rocks known “anorthosites” compose significant portions of these layered mafic intrusions (LMI). Layers of these rocks constitute a significant portion of the world’s LMI’s: Up to 21% of Dufek (Antarctica), 18% of Stillwater (US), 16% of Giles (Australia) and 6.5% of Bushveld Complex are constituted with anorthosite layers, which formed in the upper parts of these large igneous bodies. In addition, anorthosite occurrences are often associated with Fe-Ti oxides, principally magnetite, with remarkable titanium and vanadium content. This article goes into deciphering the term “anorthosite” as well as shedding light into associated ore deposits and their metallogeny.

Strictly speaking, the name “anorthosite” is applied to a rock composed of 90 to 100 of calcium-rich plagioclase feldspar and small amounts of high temperature minerals like pyroxene, olivine, magnetite (Fe3O4) or ilmenite (FeTiO3). Feldspar is a very common mineral and occurs in virtually all igneous rocks, but rocks containing 90%+ calcium feldspar are less common. In the field they are essentially a monomineralic rock, consisting of one essential mineral distinguishable with the naked eye.

Anorthosite first caught the attention of its discoverers in the first half of the 19th century. Specimens were prized for the iridescence exhibited by large feldspar crystals. The colour of these rocks may vary, but the most attractive are those composed of labradorite plagioclase which exhibits the play of greenish, blue and yellow colours due to its structural patterns (Fig. 1; labradorescence). Specimens with the highest quality labradorescence are called “spectrolites” and are often regarded as decorative stones or even gemstones.

There is direct evidence that the lunar light-coloured highlands of the moon, surrounding dark basaltic plains, are composed of anorthosites. Moreover, there is indirect evidence that these rocks also form the bulk of the Mercury crust. The bulk of Earth’s anorthosites are thought to have been formed during Archean-Proterozoic periods (500 Million to 4 Billion years ago).

Archean anorthosites are also called ‘megacrystic’ anorthosites due to their distinctive large (up to 30 cm diameter) of plagioclase crystals. These complexes typically host non-economic Fe-Ti oxide minerals deposits, principally ilmenite and magnetite. On the other hand, valuable chromite deposits are often found in Archean anorthosites complexes, such as Fiskenæsset (West Greenland), Sittampundi (India), Messina (South Africa), and Big Trout Lake, Ontario (Canada). In most cases, chromite deposits occur as distinct layers from 0.5cm to 1m thick (in Sittampundi it reaches even 6m!) or as a groundmass surrounding megacrystic plagioclase.

Proterozoic anorthosites are the most abundant on Earth and are also called “massif-type” anorthosites in connection with their large size. A characteristic feature of these anorthosites is the presence of significant concentrations of Fe-Ti oxides minerals, mostly ilmenite, which is known to be the primary source of TiO2. The world’s largest ilmenite deposit, Lac Tio, Quebec (Canada), lies within the Allard Lake massif-type anorthosites and is estimated to contain nearly 125 Mt of ore. The ore body occurs as layers of massive ilmenite, alternating with anorthosites.

Layered Mafic Intrusions containing anorthosites, have been emplaced throughout geologic time without any temporal restrictions: starting from the Archean (Stillwater, US) to Paleogene (Skaergaard, East Greenland). In the Bushveld Complex, chromite-rich layers, generally less than 1.5m, occur within the anorthosites of Upper Critical Zone (Fig. 2). Moreover, Platinum Group Elements are often contained in the sulfides associated with the anorthosites of this type (Merensky Reef of Bushveld Complex).

While anorthosites may host enormous Fe-Ti oxide minerals deposits they are also actively quarried for use as a decorative stone and counter-tops. The most valuable are black or dark coloured anorthosites free of veins and containing iridescence plagioclase (Fig. 1). Due to the world’s increasing demand in the alumina, anorthosites are also considered to be a potential source of it, but economic production technology is yet to come.

Anorthosites occur under a specific set of conditions and may be host economic mineral concentrations, specifically Fe-Ti and Vanadium. They may also be associated with deposits of PGE’s and Chromium. In mineral exploration, understanding the rock types associated with a deposit-type is as important as the understanding deposits themselves. Clues from radiometric dating, studies of regional and local geology, and mineralogical analysis can assist geologists in identifying the conditions that are potentially favorable for economic mineral deposits. 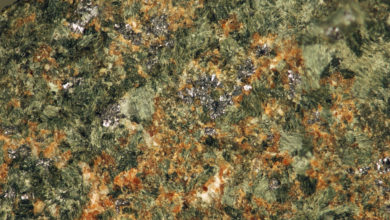 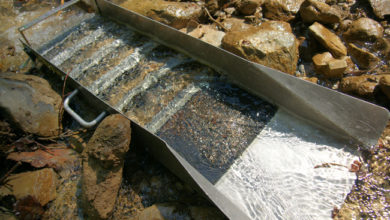 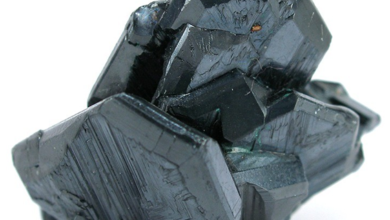