The term “porphyry” comes from the word “porphyritic”, a textural term used by geologists to describe the mineral pattern within the rocks that commonly occur in copper porphyry deposits. Porphyry copper deposits play an important role in the global economy. These deposits provide over 60% of the world’s copper and include other important metals such as molybdenum, gold and silver. Porphyry copper deposits are known for their low grades and very high tonnage.

Porphyry copper deposits are generally composed of a “plug-like” igneous intrusion – a large magma body that is emplaced beneath a volcanic system. On average these deposits can have a vertical and horizontal extent of 1-2 km and can range from tens of millions to more than one billion tons in size.

Copper in these deposits generally occurs in copper-iron sulfide minerals such as chalcopyrite (CuFeS2) and bornite (Cu5FeS4).

Over time, weathering of the near-surface rocks and the infiltration of surface water, can cause secondary copper-bearing minerals to form. Covellite (CuS), chalcocite (Cu2S), azurite (Cu3(CO3)2(OH)2 and cuprite (Cu2O) are examples of secondary minerals. The striking blue-green and iridescent colours of some of these ore minerals also can serve as a useful indicator of a copper mineralization for geologists and prospectors.

Porphyry copper deposits form along convergent plate margins or more specifically, ancient subduction zones. As the dense oceanic crust becomes consumed by the mantle it begins to melt. This melting or partial melting of the crust creates magma that is less dense and begins to intrude into the overlying continental crust. Intrusions navigate and interact through large conduits known as faults, assimilating or absorbing material from the Earth’s crust along the way.

The resulting intrusion may be further subdivided by geologists based on the chemical composition of the magma and this composition can have an influence on the exploration methods and deposit characteristics. Calc-alkaline and alkaline porphry copper deposits are identified by the ratios of sodium and potassium to magnesium and iron in the rock. While a discussion of these two types is beyond the scope of this article, it should be noted that the two types of magma can produce significantly different types of copper deposits. Alkaline porphyry deposits produce small alteration footprints which makes exploration a challenge. Calc-alkaline deposits can have very large alteration halos increasing the size of the deposit.

Magma can produce hydrothermal fluid that interacts with the surrounding rocks and rises to the surface. This hydrothermal fluid changes the chemistry of the surrounding rock either by adding new elements or removing elements. This addition and subtraction creates an alteration pattern within the host rocks. The mineralogical composition of the alteration is based on the temperature and pH of the conditions from which the minerals were created. Parts of the intrusion that are enriched in fluid can produce the porphyritic-textured rocks for which porphyry deposits are named.

Company news releases relating to copper porphyry deposits will often refer to these various alteration zones. These includes potassic, propylitic, argillic and phyllic. Although these zones can overlap and make understanding the deposit difficult, there is a general consensus on how these zones are related to economic mineralization. Potassic alteration tends to be associated with high temperature and the core of the deposit, followed by Propyllitic-Argillic-Phyllic (not always in that order).

Mapping chemical alteration of the rocks surrounding a porphyry are a useful exploration tool and can help direct geologists to the mineralized ore.

The same hydrothermal fluids that alter the rocks of a magma body may also contain dissolved metals which can be deposited within the surrounding rocks either by replacing minerals within the rock – creating disseminated or dispersed mineralization –  or by forming within small fractures that develop within the rock – creating veins and smaller veinlets. Rock conduits exposed to great pressure from hydrothermal fluids may also form zones of intensely broken up rock called breccia pipes (either within the intrusion or the country rock). Porphyry copper deposits can also be associated with epithermal gold deposits formed by the same volcanic complex above the deeper-seated porphyry. If alteration occurs in carbonate-rich (or volcanic) rocks, then skarn mineralisation may also develop.

Exploring for Porphyry Deposits in BC, Canada

The first steps to evaluating any property include determining the geologic setting, and the local geology through geologic mapping and sampling. Knowing that these types of deposits form within convergent margins helps exploration companies geographically narrow where they begin to look. However, in some cases the bedrock is overlain by several meters (10-100m) of soil and glacial sediment. In British Columbia for example, surface exploration sampling surveys such as soil, stream and till sampling are common but geochemical anomalies discovered through these methods should not be heavily relied for drill targets as glaciation may have completely eroded the deposit. In British Columbia, many economic deposits are buried under thick glacial till. Exploration companies solve this challenge with RC drilling which helps to quickly determine bedrock geology. Sampling of the overlying sediments through RC drilling can also be used to analyse heavy metal concentrates (HMC/sulphides) within overlying glacial till to locate other economic targets.

Geophysical tools such as resistivity and IP (Induced Polarization) and electromagnetic surveys are helpful in narrowing target windows, due to the disseminated, or dispersed, style of copper sulphide mineralization and the shape and size of porphyry ore bodies.

Open-pit mining is a very common surface mining technique applied to porphyry copper deposits. If the pit can no longer be mined, it may be economic to continue mining underground. Underground mining has been and is currently being developed within some producing mines today (ie. Chuquicamata, Chile).

The world’s largest copper mine, Chuquicamata, has been in production since 1910. Located in the high plain of the Atacama Desert (1500km north of Santiago, Chile). Chuquicamata is, one of the driest places on earth.

Operated by nationally held Codelco, Chuquicamata may have contained as much as 9000 million tonnes of ore and reserves and has produced 500,000 tonnes of copper and over 10,000 tonnes of molybdenum. Underground mining began at Chuquicamata in 2019, with an expected end of production in 2060.

The nearby, and geologically similar, Escondida mine is now the world’s largest copper producer.

The enormous and remote Grasberg mine is located in the western half of the island of Papua New Guinea, in the Indonesian province of Irian Jaya. The mine, transport links and town infrastructure was built by Freeport-McMoRan and Rio Tinto. In 2020, Freeport-McMoRan and Rio Tinto announced the sale of the mine’s majority stake to Indonesian state-owned company Inalum.

Grasberg is the world’s largest gold mine and second-largest copper mine. It was originally discovered by geologists looking for the source of the rich alluvial gold deposits in the lowlands of Irian Jaya. Between 1990 and 2019, the Grasberg district produced 33 billion pounds of copper and 53 million ounces of gold.

The main pit is now a mile wide, and current operations are being extended underground as the open pit reaches the end of life. An extensive underground mine 400m below the pit bottom is being developed using block caving techniques. The mine is expected to reach full operating capacity by 2022, supplying 240,000 tonnes per day.

British Columbia’s alkalic deposits occur along a package of Paleozoic to Mesozoic rocks known as the Quesnel terrane, and the Stitine terrane. These terranes consist a wealth of economic deposits and continue to be actively explored today. Mines and projects in this area include:

Diamonds – Where They Are Found and Why 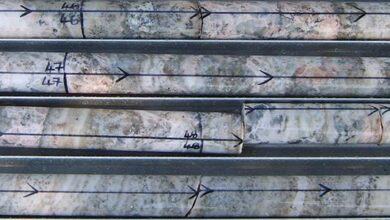