Silver, along with gold, has been prized by humanity since ancient times. It’s still one of the world’s most traded metals. Silver is number 47 on the periodic table of the elements. It has the symbol Ag, which is an abbreviation of argentum; the Latin word for silver. Silver has both high electrical conductivity and thermal conductivity, and is very malleable.

Traditionally, silver has been used in jewellery, coinage, ornaments, tableware and cutlery. Silver may be used in its  pure form or used to plate the surface of non-precious metals, such as copper, to make silver plate.

“Fine silver” is the name given to pure silver which is quite soft and easily worn. Fine silver is labelled with the number “999” which indicates a purity of 99.9% silver. Like gold, pure silver is a little too soft to be of practical use for jewellery and coinage. Fine silver is an investment vehicle traded as ingots, bars and collectible coins,

“Sterling silver” is silver that has been alloyed with copper to make it harder and stronger. Sterling silver is made up of 92.5 % silver with 7.5% copper. Jewellery and other items are marked with the number “925” to indicate that they are made from sterling silver.

Many old coins were minted with sterling silver, whilst later ones had a silver content of only 50%.  Silver is not used extensively in coinage nowadays due to its high value.

Silver is used in dentistry as a silver-mercury amalgam, to repair teeth and to fill cavities. The amalgam bonds extremely well with teeth providing hard-wearing, long life repairs.

Silver is one of the most reflective metals known. High precision optics such telescope mirrors were once coated with silver. Unfortunately, silver has a tendency to tarnish which can significant reduce its reflectivity. This tarnish is actually a sulphide compound rather than an oxide.

Traditionally, ordinary household mirrors had a very thin silver coating deposited on the back surface of a glass sheet. Over this, a layer of paint was applied to protect the silver coating from tarnishing and scratches. These days, aluminium has replaced silver in most cases due to its greater resistance to tarnishing and corrosion.

Before the digital camera age, silver was used extensively in photography. A silver halide compound such as silver iodide was applied to paper and film. This compound is very sensitive to light. After exposure to light, the film or paper was “developed” and then “fixed” to reveal an image, which was made up of millions of minute silver particles. Nowadays, silver is not widely used in photography but may still be used for specialised applications.

In nature, silver occurs in many different forms. As a metal, it can found as native silver or alloyed with gold as electrum.

More commonly, silver occurs as compounds with other elements such as sulphur, arsenic, antimony and the halides i.e. chlorine, iodine, and bromine. Common silver minerals include; argentite, a silver sulphide and chlorargyrite, a silver chloride.

Silver is mainly mined from lead-zinc-silver deposits. In the primary ore, silver is in the form of galena, a lead sulphide, where it exists as minute particles of argentite.

As a silver-bearing lead ore deposit undergoes weathering, silver is freed from galena and deposited as various secondary minerals, such as chlorargyrite. At deeper levels within the deposit, the abundance of silver minerals decreases until the value of the lead is greater than the silver. In addition to galena in the primary ore, the zinc sulphide mineral sphalerite is also often present.

The most common source of silver is strata-bound lead-zinc-silver ore deposits within very old folded sedimentary and metamorphic rocks. Cannington in north-west Queensland, Australia is an example of this type of deposit and is the biggest silver producer in the world. Silver can also be found associated with copper, copper-nickel and gold ore deposits. 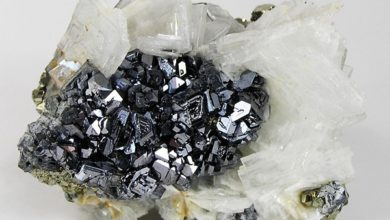