Cobalt is a strategic metal in the clean energy economy. First Cobalt is a pure-play cobalt company engaged in creating a North American cobalt supply chain by both exploring and refining ethically sourced cobalt. First Cobalt owns the only permitted cobalt refinery in North America, which is a key component for making batteries to the EV market.

Cobalt is a bluish-gray metallic element with chemical properties similar to iron and nickel. Although it is a relatively abundant element, economic deposits of cobalt are rare. For this reason, cobalt is considered a critical element. Cobalt is typically mined as a by-product of copper or nickel deposits. Examples include the copper deposits in the Central African Copper Belt and nickel-laterite deposits in Australia. One of the few primary cobalt mines in the world is Bou Azzer, in Morocco, which is owned by Morocco-based Managem (CSE:MNG).

Cobalt is one of the few elements with ferromagnetic properties, i.e. it can be influenced by exposure to an external magnetic field. It remains magnetic up to extremely high temperatures, making it an important component of specialized magnets and super alloys. Yet, one of the main applications of cobalt is in rechargeable lithium-ion batteries of EVs (Figure 2). Cobalt has also been used since ancient times as a pigment to impart a blue color to glass and porcelain. Another application of cobalt is the fabrication of strong and stable superalloys used to build turbine blades and jet engines for aircraft.

The Iron Creek project, First Cobalt’s flagship, is a cobalt deposit with significant copper credits located in the most prospective trend of cobalt mineralization in the US – the Idaho Cobalt Belt (Figure 4). The asset includes mining patents and exploration claims that span 1,698 acres. The deposit was discovered in 1946 and extensively explored in the 1970s.

First Cobalt has assembled a significant land package spanning over 100km2 in the Canadian Cobalt Camp aimed for district-scale cobalt exploration. With more than 50 past-producing mines, the district records historic production of 600 Moz silver and 50 Mlbs cobalt. The camp consists of three exploration areas: Cobalt North, Central, and South (Figure 6). In 2017, an extensive drilling program was conducted to test prospective areas with historical cobalt and silver mining, and to better constrain the geological context of the mineralization. Deposits are spatially and temporally controlled by mafic intrusions and preexisting regional-scale basement structures. The silver-cobalt mineralization is typical of five-element (Co-Ni-As-Ag-Bi) vein type deposits. Veins are usually structurally-controlled by steeply-dipping faults, with mineralization hosted within or adjacent to mafic intrusions.

The First Cobalt Refinery will be the only North American producer of refined cobalt for the EV market (Figure 7). Located in Ontario about 600 km from the US border, the refinery has the potential to produce both cobalt metal for industrial and military applications and cobalt sulfate used in lithium-ion EV batteries. Originally built with a nominal throughput of 12 tonnes per day, the facility was permitted in 1996 and operated intermittently until 2015. The refinery was acquired in 2017 after a 50-50 joint venture of First Cobalt with Australian-based Cobalt One Limited. Cobalt One Ltd. merged with First Cobalt that same year. Plans for the reopening and extension of the plant were stimulated by a recent agreement with London–based Glencore (LSE:GLEN, JSE:GLN).

First Cobalt received $10 million in funding early this year from the Canadian government to accelerate the development of its refinery and establish a domestic source of ethical cobalt for the EV industry. The construction of the $77 million plant is planned to start in June 2021 with the first cobalt production projected for the second half of 2022. After completion, the facility will be able to produce 25,000 tons of battery-grade cobalt sulfate per year – 5% of the global cobalt market. This will help reduce dependence on Chinese refineries, which provide roughly 80% of the world’s cobalt.

Future Outlook Of The Cobalt Market

Increasing concern related to climate change has been fueling a worldwide transition to a green economy. Strongly driven by the EV market, cobalt demand is expected to grow 15-20% annually (Figure 8). Yet, cobalt’s fragile supply chain caused recent volatility in the commodity price. This was also prompted by other factors such as the closure of Glencore’s Mutanda Mine in the DRC – the world’s largest cobalt mine. Despite dominating the production of cobalt in the world, the DRC has been afflicted by the controversial use of child labor, illegal mining, and socio-political instabilities. This incited the mining industry to develop new projects to meet cobalt demand. The creation of the first cobalt refinery in North America is a major step towards a more secure, diverse, and sustainable cobalt supply chain. 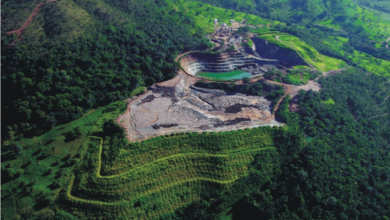