Breaker Resources (ASX: BRB) is a company exploring  the eastern goldfields superterrane of Western Australia, and they have recently discovered a large gold bearing system on their Lake Roe property. The system is a quartz sulfide vein system, or “stockwork” at the contact between a quartz-dolerite and dolerite, under highly weathered products known as saprolite and (less weathered) saprock. The system is large – 8 kilometres from North to South, with 2.2 kilometre core zone called the Bombora discovery, and the mineralization is shallow occurring under as little of 5 metres of weathered sediment. It’s a very good example of using a geological model to drive exploration when there is zero surface indication of geology.

The initial attraction was work done by other companies indicating gold mineralization (4m of 0.71 g/t Au) in a favourable setting; a domed, fractionated dolerite with lamprophyre, numerous large lineaments and crosscutting de-magnitization features (potential altered zones). Work had been only touched the top of the saprolite, and not tested the dolerite underneath. This first round of exploration used aircore drilling – a shallow drilling method where air essentially blasts out the material from a short (50 -60 metre) hole. Aircore drilling doesn’t give much in the way of grade but it is a quick and effective way to determine if gold is present. This method of exploration is unfamiliar in North America, but common to highly weathered terrains, such as western Australia: Aircore drilling is followed-up by RC drilling, and finally in the stage of resource definition, diamond drilling.

Dolerite is also an uncommon term in North American exploration, but is equivalent to Diabase which is a fine grained mafic (igneous) rock. Compositionally they are equivalent to gabbro and basalts, and texturally they fall between the large-crystalled igneous, but non-volcanic grabbro’s and the very fine grained volcanic basalts. The classic habit of a diabase/dolerite is as either vertical sheets (“dykes”) or horizontal sheets (“sills”), though they do form larger intrusive bodies. In Western Australia’s Archaean rocks, there is a very strong relationship between gold mineralization and the presence of dolerite, analogous to the diabase-gold mineralization association in the greenstone belts of Canada. In many cases – including at Lake Roe – these deposits are crosscut by lamprophyre (“lamp”) dykes.

Lamprophyres are a very different species from diabase/dolerite and are noted for their deficiency in silica and enrichment in sodium and potassium. They are similar to diabase/dolerite in their generally mafic (high-temperature iron rich silicate) composition, but their mineral composition includes large biotite (potassium rich mica) crystals and a family of minerals known as amphibole (or hornblende). Like kimberlites, they form at great depths and are seen as a connection to the mantle. Given their spatial association with Archaean gold mineralization, debate has focused on their role as potential mineralizer or later intrusion. Lamprophyre’s are generally gold deficient and while it’s possible that they were the source of the gold in associated systems, the association with gold deposits is more likely to be related to large scale structural activity. Lamprophyres are an indicator of tectonic extension and they occur in the same places that hydrothermal systems are likely to occur. So the importance of Lamprophyres is that they likely indicate an extensional environment with the potential for large volumes of hydrothermal activity.

Saprolite and or Saprock are generic terms for rock that has been so weathered for so long under hot wet conditions that most of the iron minerals have been leached out. This leaves a silica-alumina clay residue. Saprock is the least weathered of the two and directly overlies the bedrock. In stable tectonic environments such as Western Australia, saprolites and saprock formation may leave gold (or other metals) in place. Laterites are a similar weathering product more typical of tropical areas and may also host economical mineralization.

The property lies in a fairly fertile neighbourhood with the 3.5 million oz Au Carosue Dam to the north and 0.9 million oz Karonie deposit  to the south. This is also the same superterrane that hosts the Kalgoorlie deposit to the north. Since acquiring the ground in 2015 Breaker has made rapid progress from outlining to drilling off a major gold bearing system. The gold grades are decent, falling between 1-4 g/t Au over depth and along strike. Shorter high grade intervals up to 119 g/t are present to sweeten the overall economics. The style of  gold mineralization is very common in western Australian and has good depth potential, which is starting to be tested as Breaker moves from RC to Diamond drilling.

This deposit is somewhat similar to Balmoral’s Martinière Project we talked about a few months ago in that it is related to a structural “break”. Like the Abitibi Greenstone Belt in Canada, in Western Australia gold mineralization is concentrated along long shear zones which mark the boundaries between separate domains. While not directly associated with the mineralization they serve as channels for fluid flow, which is then deposited in subsidiary structures usually at high angles to original shear zone. Still, there are significant differences where are Balmoral was in a complexly deformed meta-sediment/meta-volcanic sequence, the geology at Lake Roe is much simpler. Mineralization is focused at the contact between a dolerite and a quartz dolerite. Unweathered, mineralization is hosted in iron sulfides, with associated quartz, biotite, albite and carbonate alteration.

As mentioned, Breaker has made rapid progress in drilling off the system. Currently 89,000 metes of both diamond and RC drilling have been done and Breaker is targeting a maiden resource in late 2017. In the current round of drilling (July 2017), they have drilled some of the deepest holes on the property and have intercepted mineralization at depth (435 metres, true depth 350 metres), suggesting that the deposit has long term potential. With $7.3 million AUD in working capital they have some decent cash to explore for the near future and given the excitement that the discovery has caused they should have no problem raising more. 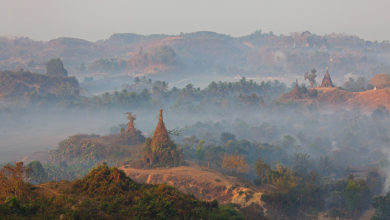 The Promises and Risks of the Myanmar (Burma) Mining Industry