Antamina is located in the north-central part of Peru, in the Andes Mountains, at an elevation of 4,300 m. It is recognized as one of the largest skarn deposits in the world, with estimated resources of 3 Mt averaging 0.89% copper, 0.77% zinc, 11 g/t silver, and 0.02% molybdenum. The Antamina mine is owned by the Compañía Minera Antamina, a joint venture between BHP Billiton (NYSE:BHP, ASX:BHP, LSE:BLT; 33.75%), Glencore (LSE:GLEN; 33.75%), Teck (TSX:TCK.B, NYSE:TCK; 22.5%), and Mitsubishi Corporation (TSE:8058; 10%). The open pit is mined by the truck-and-shovel method, with ore processed by grinding and flotation. The mining operation started in 2001 and has a life of mine estimated to 2029. The main products include copper, zinc, molybdenum, silver, and lead concentrates.

The north-central part of Peru comprises, from west to east, a desert (aka ‘zona costera’), the Occidental Cordillera, and the Oriental Cordillera.The term Cordillera comes from the Spanish word for rope (cuerda) and is a group of parallel mountain ranges. Antamina is located in the eastern part of the Occidental Cordillera (Figure 1). The region between the Pacific Ocean and Antamina consisted of an old magmatic arc that was active from the late Jurassic (~ 145 Ma) until the early Cretaceous (~65 Ma). Arcs make up chains of volcanic activity that occurs on the overriding plate in subduction zones. In the Antamina region, geologic structures and stratigraphy are parallel to the arc chain, which displays a major northwest-southeast trend.

A skarn is a metamorphic rock that forms when a magma body intrudes into carbonaceous sedimentary rocks. The hydrothermal processes that lead to the formation of skarn deposits may affect both sedimentary wall rocks and igneous intrusive rocks, which results in the formation of exoskarn and endoskarn, respectively. At Antamina, marine-deltaic sediments were intruded by multiple pulses of intrusive bodies emplaced around 10 million years ago (i.e., late Miocene). The intrusions have calc-alkaline compositions, typical of calcium/magnesium-rich oxidized magmas, which is characteristic of continental crust. The intrusions’ rock types vary from monzonite1 to granodiorite2. The sediments, deposited during the Cretaceous (between ~145 and 65 million years ago), consist of intercalated limestone, marls, calcareous shale, and siltstone.

Antamina (3 km long by 1.5 km wide in the northeast direction) is a skarn deposit with copper/zinc, silver, molybdenum, and bismuth formed after the intrusion of quartz monzonite into carbonate-rich sedimentary rocks (limestones and marls) (Figure 2). Consistent mineral zonation is controlled by stratigraphic and structural settings (Figure 3). Alteration zonation outward from the intrusion is characterized by brown and pink garnet endoskarn, transition/indeterminate skarn, brown and green garnet exoskarn, diopside exoskarn, wollastonite exoskarn, hornfels, marble, and limestone (Figure 4). Hydrothermal breccias (rocks composed of large fragments of other rocks)  are preferentially associated with the quartz monzonite intrusion and endoskarn units, but they can be widespread throughout other lithologies.

Copper content is roughly homogeneous from the intrusion core to the limestone contact. Chalcopyrite (CuFeS2) is the dominant copper sulfide. Minor copper content is present as bornite (Cu5FeS4) associated with wollastonite in the outer zones of the skarn. Zinc mineralization occurs as the zinc-iron sulfide mineral sphalerite, which generally marks the transition from brown to green garnet skarn. Molybdenum exists as the sulfide mineral molybdenite (MoS2) and is confined to the intrusion core and surrounding endoskarn. Silver is reported in any of the skarn lithologies. Generally, bismuth and lead occur in the outer edges of the Cu-Zn-rich core as bismuth-bearing minerals and galena (PbS), respectively.

Late breccias crosscutting all skarn types make up an important and widespread ore host. They tend to be particularly common in the endo-exoskarn contact, which delineates the original margins of the intrusion, and in other structurally weak sites throughout the deposit.

The structurally-controlled flow of magmatic-hydrothermal fluids that triggered the polymetallic mineralization at Antamina is estimated to have lasted for nearly 1.5 million years. According to research in the area, key factors that led to the development of the world-class Antamina deposit include: (i) mantle-derived intrusions; (ii) favourable host rocks and structures developed in a marginal basin setting; (iii) overall lack of retrograde alteration, and (iv) partial preservation. Another remarkable characteristic that makes Antamina so special is the unusual concentration of copper and zinc. Zinc skarns typically form far away from the fluid source, i.e. the intrusive body, whereas copper skarn are usually proximal. Therefore, episodic intrusive events are presumed to have contributed to the formation of the deposit, which would also help explain the anomalous metal content found in Antamina. The systematic zonation of sulfide mineralogy and metal ratios outward from the intrusion recorded in this polymetallic deposit is commonly used as an exploration proxy to fingerprint mineralization.

Low grade (sub-economic) porphyry Cu-Mo mineralization is also reported for quartz monzonite intrusions at Antamina. Skarn deposits tend to be smaller than other spatially associated deposit types as porphyries; however, they are usually higher grade. At Antamina, the overlap between these deposit types is evidenced by the involvement of porphyritic intrusions, stockwork3 veining, breccia formation, and hydrothermal alteration, which attest for their formation at shallow crustal levels.

Other major economic skarn deposits worldwide include the Ok Tedi mine in Western Province, Papua New Guinea (owned by Ok Tedi Mining – OTML:PNG) and the Bingham Canyon Mine, in Utah, USA (owned by Rio Tinto – NYSE:RIO). Similar features between these deposits and Antamina include their association with mineralized porphyry copper intrusions.

The systematic alteration zones surrounding Antamina define a district-scale zoning that can be used to vector concealed skarn deposits in other potential areas. The geochemical assessment of areas under exploration based on metal ratios using immobile elements like aluminium (i.e., metal/Al) can provide a reliable proxy for mineralization. Since skarns are generally denser than the surrounding rocks, they are likely to be depicted by gravitational anomaly or seismic discontinuity. Moreover, due to the typical high abundances of pyrite, chalcopyrite, and magnetite, copper skarns may be pinpointed by a magnetic high. On a deposit scale, instrumental methods, e.g. infrared spectroscopy and X-ray diffraction, can be used to identify the main mineralogy of skarn deposits. 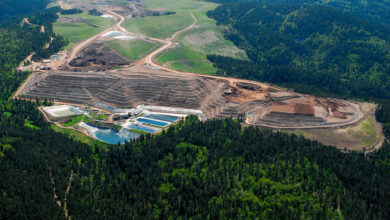 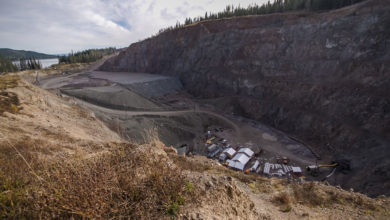