The history of gold mining in Brazil dates back to the 1600s,  when the country was discovered by Portuguese settlers.  Early expeditions focused in an area that would become the country’s major gold producing region – Ouro Preto.  These early discoveries led to a flurry of activity that persisted until the 19th century in what became known as the longest gold rush in the world.

Widely accepted as the oldest continental crust exposed in central Brazil, the GAB comprises predominantly high silica rocks typical of ancient terranes (TTGs) and five discrete greenstone belts (Fig. 2). Archean TTG rocks are intrusive igneous rocks containing high amounts of silica and low amounts of potassium feldspar – Tonalite-Trondhjemite-Granodiorite.  Based on the current knowledge of the area, the TTG terranes are considered devoid of gold mineralization. The greenstone belts, however, have been extensively mined for gold.  The Crixás greenstone belt hosts the seventh largest gold deposit in central Brazil (Serra Grande Mine, AngloGold Ashanti; ca. 6Moz total gold production).  Deposits hosted in the adjacent Guarinos and Pilar greenstone belts constitute the Pilar mining complex (Equinox TSX:EQX). As of May 2018 the proven and probable reserves for the Pilar mine were 7Mt at an average grade of 1.18 g/t Au.

The Faina greenstone belt consists of sediments stacked on top of older volcanic rocks with gold mineralization in the younger section. Two main mineralization styles in the Faina greenstone belt include (i) vein-hosted free gold at the Cascavel deposit, and (ii) disseminated sulfide-hosted gold at the Sertão deposit. An overview of the hydrothermal alteration, lithological, and structural settings of these deposits is provided below.

Hydrothermal Alteration and Gold Mineralization in the Cascavel and Sertão Deposits

Hydrothermal alteration produced by the flux of metal-rich fluids along lithological (e.g. quartzite, carbonaceous schist) and structural traps (e.g. fold hinges, shear zones) are responsible for the gold concentration in the Cascavel and Sertão deposits.

Quartz vein-hosted gold mineralization at Cascavel, the only gold deposit hosted by quartzite in the GAB, is controlled by fold hinges and shear zones. Alteration zonation towards the orebody in the Cascavel deposit is characterized by distal quartz-alkali feldspar, intermediate quartz-green mica-biotite-pyrite, and proximal quartz-white mica-pyrite±chalcopyrite. Free gold occurs in folded quartz veins with minor mineralization disseminated in proximal alteration zones. Mineralized quartz veins can reach up to 2m in width. Free gold (≤ 2 cm size) tends to precipitate along fold axes, as shown by its typical elongated shape (Fig. 3).

The two mineralization styles were developed during a major continent-continent collision (ca. 2.1-1.9 Gya). This is evidenced by their similar proximal hydrothermal alteration assemblage, the temperature of ore-forming fluids, redox, and pH conditions. After the deposition of the volcano-sedimentary basin, an early compressional event led to regional folding, faulting, and basin inversion that marked the peak of metamorphism. Subsequent shortening led to additional folding and the development of thrust faults. This deformation event was responsible for the bulk of gold mineralization in the Faina greenstone belt.

Early basin architecture (e.g. syn-sedimentary faults) and intensely deformed zones have an important role in the formation and distribution of gold deposits in the Faina greenstone belt. Older sedimentary units and iron-rich rocks are significant hosts to gold mineralization. The interaction of reactive geological units like carbonaceous schist during ore fluid flux may trigger gold mineralization. Gold mineralization can be identified by using alteration assemblages typical of proximal zones in both the Cascavel and Sertão deposits such as white mica, pyrite, arsenopyrite (iron-arsenic sulfide), and Fe-rich carbonate. Another characteristic used to identify this type of mineralization is elemental ratios, e.g. Th/Sc and Cr/Th, obtained from geochemical analyses of rock samples.

The Faina greenstone belt’s riches may include minerals other than gold. Recent studies revealed the potential for polymetallic mineralization related to East-West-oriented structures in the Faina greenstone belt. The presence of anomalous silver, tungsten, copper, iron, lead, and barium contents along these structures is not well understood and deserves further investigation. However, mineral assemblages reflected by this mineral system suggest contrasting fluid conditions to the main gold mineralization event in the Faina greenstone belt. Likewise, a set of conspicuous I-type granites, i.e. intrusions formed by melting of igneous rocks bordering the GAB to the east, might comprise a potential source for other metal concentration such as copper. 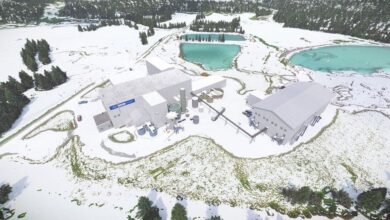