The company boldly calls it a “World-Class $40 Billion SEDEX Target”, but a more accurate statement would be “a Sedex Prospect based on geophysical surveys and knowledge of area geology”.

VANCOUVER, BRITISH COLUMBIA–(Marketwired – April 29, 2014) – Santa Fe Metals Corporation (TSX VENTURE:SFM) (“SFM” or the “Company”) announces that drill hole SU14-07 is now over 1000-m deep (equivalent to a vertical depth of approximately 900 m from surface), with an excellent trajectory toward the East sedimentary exhalative (SEDEX) target at the Sully Project.

Santa Fe Metals has been undertaking something of a media blitz as of late. Since they began drilling at their Sully Project a few weeks ago they have published 4 news releases providing updates on the progress of a single hole. Since they’re working so hard to get attention we thought we’d do our part and give them some.

Santa Fe started out in 2007 as Tequila Mineral Corp. and was initially focused on the Cuatro Ciénegas Project, a copper-silver-lead-zinc prospect in Mexico. In 2010 they agreed to sell 40% of that project to Tahoe Resource Group for US $5 million. Unfortunately for the company (now thankfully called Santa Fe Metals), that agreement fell apart. In the fall of 2013 they agreed to option the project to Brigadier Minerals for about $300,000 upfront and up to $850,000 over the life of the agreement. Brigadier has the right to earn 100% of the project providing they make annual payments over the next few years. We mention this because it is a good demonstration of how the market has changed over the last few years: From 2010 to 2014, the Cuatro Ciénegas project was devalued from $12,500,000 to $850,000.

Sante Fe picked up the Sully project in September 2013 right around the time they were getting ready to give up on Cuatro Ciénegas.

So what’s Sully about? The company calls it a “World-Class $40 Billion SEDEX Target”. Of course, if it was worth $40 billion their share price wouldn’t be at $0.07. The $40 billion number is apparently the current value of all the metals that were mined from Sullivan over it’s 92 year life. In reality, the Sully Project is a geophysical prospect near to the past producing Sullivan mine. So a more accurate statement would be “a Sedex Prospect based on geophysical surveys and knowledge of area geology.” I’ll admit that it doesn’t roll off the tongue quite as nicely, but in my opinion its far better than the ridiculous $40 billion dollar headline.

SedEx stands for Sedimentary Exhalative. SedEx deposits form when metal-rich brines are “exhaled” into the water due to deeper hydrothermal activity and deposited in sedimentary beds on the sea floor. They generally contain lead, zinc and silver and may also contain economic concentrations of copper, gold, bismuth, tungsten and tin. The Sullivan Mine was a SedEx deposit and large producer of lead, zinc, silver and tin.

Sante Fe believes they have a large SedEx target based on a geophysical survey of the area which shows a coincident gravity high and airborne magnetic anomaly. By “coincident” we mean that the anomalies essentially overlap. In geophysical surveys, coincident anomalies can be encouraging and may help the interpreter makes predictions about the subsurface geology. For example, a gravity high indicates a rock that is more dense than the surrounding rock. In this case, the company believes that massive metal-sulfides may be responsible for the gravity high. A magnetic anomaly may also be caused by magnetic iron sulfides such as pyrrhotite. Using the two together helps reinforce a theory and define a drill target. Notice that we’ve used the words “theory” and “interpretation”. You don’t really know what’s down there until you drill.

The top of the East Target is interpreted at a depth of 800 to 1,000-m from surface. SU14-07 started at -70 degrees east has flattened to -60 degrees. It is interpreted that at least two sub-horizontal faults and two sub-vertical faults, all with significant offset, were intersected by this drill hole. Challenging ground conditions associated with the most recent sub-vertical fault have slowed advance rates. The drill hole is anticipated to reach the western edge of the East target range shortly, and to completely test the full width of the target range within the next 500-m of drilling.

We’ve included a simplified cross-section of the project from the company news release below. Note that earlier holes only found trace mineralization and are interpreted as having missed the primary anomalies. This wasn’t their intention of course, but since they clearly missed their target, the interpretation of the subsurface has been modified. Downhole geophysics performed during previous drill attempts will  help the company refine their targeting. This core of this release is that the company is having some challenges penetrating the anomaly due to sub surface faulting and tough ground conditions. This shouldn’t stop the drill, but may slow it down a bit. Faults can potentially deflect a  diamond drill depending on the angle of intersection of the rock types involved – sort of like skipping a rock over the water. If a drill hits a contact at a shallow angle it can bounce off or skim the contact.

Sully is located near Fort Steele, 30-kilometres east of the world-famous Sullivan mine at Kimberley, B.C. The East target is one of two gravity mass anomalies estimated to come within 800 metres of surface, and extending to depth. Coincident magnetic anomalies reinforce the positioning of the large-scale gravity masses also estimated to be approximately 800m apart. Management believes the best explanation for the twin gravity anomalies is the presence of two very large vertically oriented SEDEX massive sulphide bodies.

Santa Fe’s biggest marketing tool for this project is their proximity to the old Sullivan mine. They’ve even given the “Sully” project a similar sounding name. We’ve talked before about basking in the reflected glory of successful neighbors: It’s pretty common in the mining industry (and everywhere else) and isn’t an entirely bad way to operate. After all, the chances of finding an economic deposit in a “proven” area are a heck of a lot better than hiking through green fields in search of the next undiscovered mining district.

Sullivan was discovered in 1892 and is one of the largest SEDEX deposits in the world. Over its roughly 100-year lifetime, Sullivan produced almost 300 million ounces of silver, 36 billion pounds of lead and zinc plus smaller amounts of other metals, collectively worth over $40- billion at current metal prices. The company cautions that past results or discoveries on proximate land are not necessarily indicative of the results that may be achieved on the Sully property. 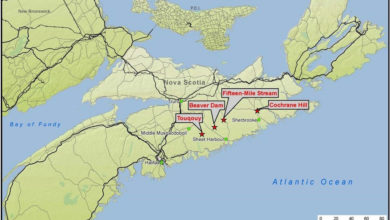 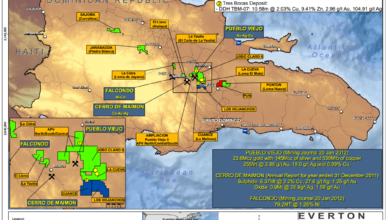 Everton Resources Still Looking for High Grades in the Dominican