Access to good quality historical data and drill-core is a big boon for Highland. Not only will they save a great deal of money by not having to repeat previous work, but they will be able to use that data to more confidently plan new exploration activities.

LONGUEUIL, QUEBEC–(Marketwired – July 3, 2014) – Highland Copper Company Inc. (TSX VENTURE:HI) (“Highland” or the “Company”) is pleased to report the results from an initial exploration program conducted at the White Pine North Project located in the Upper Peninsula of Michigan, an area which has historically been one of the most important copper producing regions in the United States. Figure 1 shows the projects in which Highland has an interest.

Highland has recently completed the interim closing of the acquisition of the White Pine copper project from Copper Range Company (“CRC”). The production at the former White Pine mine from 1952 to 1995 was 198,070,985 short tons averaging 1.14% copper, for approximately 4.5 billion pounds of copper. Mining ceased at White Pine in 1995 due largely to depressed copper prices, although significant amounts of mineralization remained, particularly to the north of the former mine (“White Pine North”). In 1995, CRC completed an estimate of resources at White Pine North based on 526 diamond drill holes. Highland’s exploration efforts are focused on that area, with the objective of completing a National Instrument 43-101 compliant resource estimate in 2014.

The Upper Peninsula of Michigan, USA has long been known for it’s abundance of native copper, a rarity compared to most copper deposits. Evidence shows that Native Americans mined the copper and fashioned tools from it as early as 3000 BC. Large scale mine operations were developed by the 1840’s and flourished until the 1960’s. The White Pine mine went into production just as many of these earlier mines were shutting down and it operated for more than forty years before being shut down in 1995 due to low copper prices.

Highland added the White Pine mine property to it’s portfolio on May 2014 and plans to assess the current mineral resources of White Pine North. This release is about the completion of the first phase of a two phase drilling program outlined in their 43-101 compliant technical report (filed February, 2014).

During March and April 2014, Highland completed nine diamond drill holes totaling 8,853 meters using HQ core size at White Pine North (Figure 2). Three holes were cased for re-entry during the winter of 2015 because of spring melting. Highland also completed eleven wedges from eight holes to obtain approximately 435 kg of mineralized samples for metallurgical testing. Nine of the 12 holes were drilled vertically and core recoveries averaged over 99 percent. Highland had designed its 2014 winter drilling program both to in-fill the historical drill grid and to expand the historical mineral resource area. The results from this first phase in-fill drilling program are consistent with results from previous CRC drill programs and confirmed copper- silver mineralization from adjacent historical drill holes.

Highland conducted an in-fill drilling program on the property this past winter and was able to confirm consistent mineralization between historical and modern holes. Though historical resources estimates and drill holes cannot stand alone for modern resource estimates, in-filling these historical drill-holes will allow the company incorporate both modern and historical data into their overall resource and geologic model.

Analytical results for the mineralized zones from the 2014 drilling program are summarized in Table 1.

QA/QC or (Quality Assurance/Quality Control) procedures are implemented to ensure geochemical analyses are correct and accurate.

In January 2014, Highland initiated an analytical program to validate historical assay results from 51 diamond drill holes completed by CRC in the White Pine North deposit. Thirty-six of these holes were drilled between 1958 and 1980 with both BQ and AQ core, while the other 15 holes were drilled in 1994 and 1995 with NQ core.

Highland’s validation program used a 1/4 cut of the original whole core from 883 historic sample intervals. This resampling duplicated the exact interval previously sampled and assayed in the historical programs. The remaining 1/4 of the original core was retained as reference material. The validation analytical technique used both a screen metallic assay method and a 2.5-gram digestion ICP assay method to determine total copper and results from both methods were in good agreement. The location of the validated historical drill holes is shown on Figure 2.

The results from this validation program are shown graphically on Figure 3. Highland considers the correlation between the historical and validation assays to be excellent, showing no bias between the two groups of assays. Highland plans to use the sample values from the original program for a future resource estimate at White Pine North.

Highland has benefited from access to the original core which they have re-assayed using more modern techniques. Since the re-assays of old samples correlate well with assays from recently drilled samples, the company will be able to reasonably rely upon the historical core when calculating their resource estimates.

Highland plans to complete a second phase drilling program by boring ten drill holes totaling approximately 6,100 m, during the summer and fall of 2014. These drill holes will focus on the higher-grade central portion of the deposit.

Highland has retained G Mining Services Inc. to carry out a number of technical studies including metallurgy, infrastructure requirements and mining methods that are intended to be used in a future prefeasibility study. The Company has also retained the services of Golder Associates to initiate hydrological studies of the area overlaying the White Pine North deposit.

The company plans on advancing the project with a second phase of drilling that focuses towards a pre-feasibility study. Pre-feasibility studies are designed to determine if the resource can be economically extracted. If it can, the company may reasonably upgrade their resources to reserves.

Hydrological studies identify where water is located within the project area, how it is trapped and how it moves. This is an important part of the mine planning process identifying both the dewatering needs of the mine and local environmental implications.

The technical information contained in this news release has been approved by Carlos Bertoni, P.Geo. Highland’s Project Manager. Mr. Bertoni is a qualified person as defined in NI 43-101.

Access to good quality historical data and drill-core is a big boon for Highland. Not only will they save a great deal of money by not having to repeat previous work, but they will be able to use that data to more confidently plan new exploration activities.

Highland Copper Company Inc. is a Canadian exploration company focused on exploring and developing copper projects in the Upper Peninsula of Michigan, U.S.A. 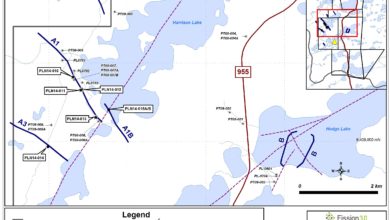 Fission 3.0 Explores Where Fission Left Off