While comparisons can be exciting, its worth reminding ourselves that the methods described here represent very early stage exploration on this part of the project and that the best indicator of gold mineralization is gold itself.

TORONTO, ONTARIO–(Marketwired – June 2, 2014) – HARTE GOLD CORP. (“Harte Gold”) (TSX:HRT)(FRANKFURT:H4O) is pleased to announce the discovery of five high priority “up-ice” Induced Polarization (“IP”) anomalies associated with shear zones, which together with a number of other anomalies were identified by the recently completed Phase 1, IP Survey on its Sugar Zone property located 60 kilometers east of the Hemlo gold mines currently being mined by Barrick Gold Corporation

Harte Gold is presenting the highlights of their recent  IP survey. IP survey’s are typically used by copper and gold junior exploration companies since they can be useful in detecting disseminated, or dispersed sulfide minerals. Hot, metal-bearing hydrothermal fluids that permeate the host rock can leave behind small dispersed grains of sulfide minerals and can alter the rock in a way that is recognizable by geologists. Identification of an  “alteration halo” can also be useful in tracing the core of a mineralized system.

Arsenopyrite (iron-arsenic sulfide), pyrrhotite and pyrite (iron sulfides) are the most common sulfide minerals associated with gold-bearing systems and may sometimes be referred to as gold-indicator minerals since they are used to aid gold prospecting.

The company’s Sugar Zone has been characterized as a epithermal deposit in the company’s preliminary economic assessment filed in May 2012. Most recognizable epithermal systems are very young (geologically speaking) and are associated with volcanic systems. Since the greenstone belts in this area is are very old (approximately 2.6 billion years) it’s probably more accurate to say that the deposit is interpreted to have originally been an epithermal deposit. Over time, structural changes and metamorphism due to heat, pressure and fluid movement can alter rocks and remobilize metals. On a larger scale these forces can cause changes in a deposit’s shape, modify it’s orientation or completely obliterate it. The introduction of fluids after formation can also lead to the transport  (re-mobilization) of gold away from its original source. Erosion from relatively recent glacial periods, makes exploration even more difficult.

The Sugar Zone property is 60 km from the “Hemlo gold camp”, a significant gold district that was discovered in the 1980’s which created a “gold rush” into northwestern, Ontario, Canada. There are two operating mines on the Hemlo Property, that are 100% owned and operated by Barrick Gold. As an exploration company it’s an added benefit to be working in an area with proven resources along with having infrastructure to access the project site.

Three of the five IP anomalies are on the edge of a previously un-surveyed topographic depression located one kilometer north-east of the Peacock boulders. This low lying area is also the location of the winter 2014 lake bottom sediment sampling program which returned high arsenic and molybdenum values, similar to the signature found in the Hemlo Camp discoveries. This topographic depression has strong potential to be the source of the Peacock boulders (see News Releases dated March 26, 2014 and May 5, 2014).

Northwestern Ontario is known in Canada for its many lakes. Because of this, exploration isn’t just limited to surface mapping and sampling. Sampling of lake water and bottom sediment are another exploration tool used by geologists. As streams and rivers drain into lakes, sediment begins to settle to the lake floor. This sediment may contain gold or even elements that could indicate the presence of gold nearby. The company has identified lake sediments with high arsenic and molybdenum values. They don’t give us a definition of “high”, but it is presumably relative to the background levels or those found in other lakes.

Geologists collect lake sediments with a torpedo-shaped coring tool. The torpedo is suspended along the side of a boat (or manually dropped by the operator) and then released to the bottom of the lake. If sufficient force is applied, the torpedo penetrates into the lake bottom and captures a small “core” of lake sediment. The “torpedo” is designed to collect the sediment, encapsulate it and prevent loss when the device is retrieved to the surface. These cores are then assayed and used to vector in on potential mineralization.

The results can be useful in identifying prospective areas for a variety of metals, but at a relatively low resolution. Interpretations of this data must also consider water flow and the history of glaciation. 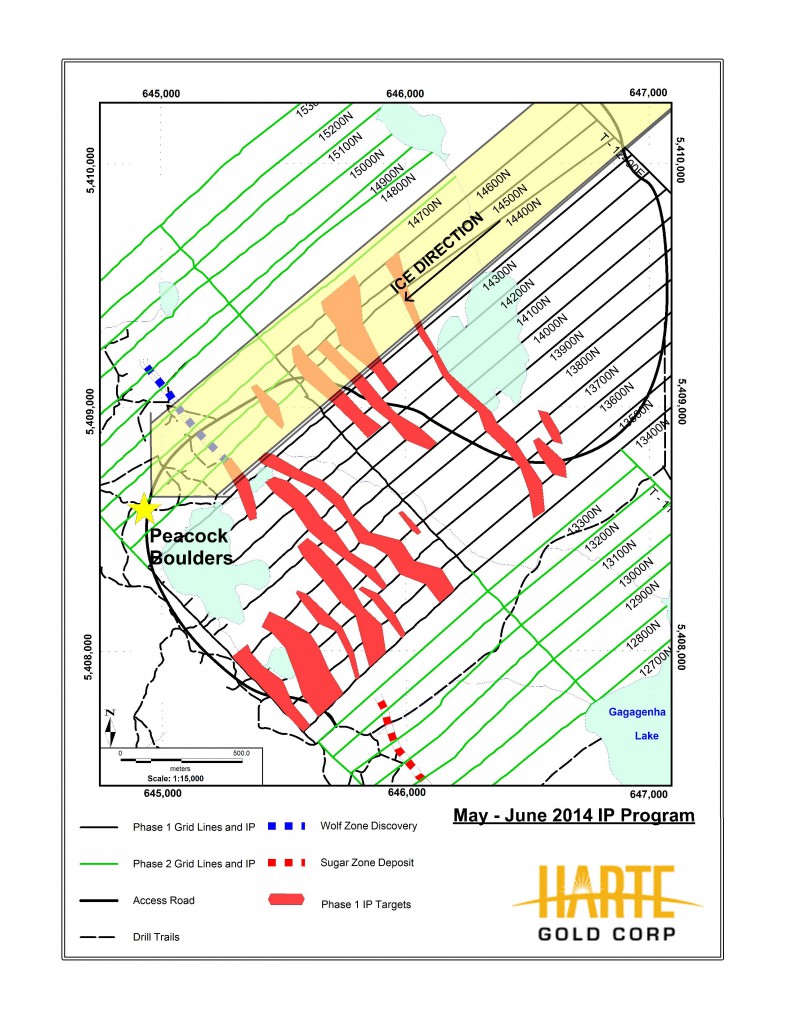 The IP anomalies associated with the shear zones are located in an area 400 meters to 1,500 meters from the Peacock boulders. The Peacock boulder discovery sits within a boulder train of angular slabs of similar material that extends one kilometer to the north-east.

The IP Survey was carried out over an area located east and north-east of both the Peacock boulder train and the Wolf Zone that was discovered in 2010. The purpose of this IP survey was to identify the source of the Peacock boulders that returned gold assays up to 87 g/t. In addition, highly elevated gold pathfinder elements such as arsenic, molybdenum, tungsten and zinc have been identified.

Robert S. Middleton, P.Eng., Consultant and Project Manager, concludes that glacial ice flow came from the north-east and traversed the five shear zones. During this process the shear zones were gouged by the ice sheet and boulders and slabs of this material were scattered down ice in the direction of the Peacock boulder.

Mr. Middleton added: “The Peacock boulders consist of sericitic, sheared and deformed rocks similar to the host rock of the Hemlo gold mineralization. Upon finding a boulder train of angular slabs of these sericitic rocks ‘up ice’ from the Peacock boulders, we decided to carry out an initial lake bottom sediment survey, returning high arsenic and molybdenum values, along a structure identified under a previous airborne magnetic survey. The structure follows a topographic depression 1 – 1.5 kilometers north-east (up ice) of the Peacock boulders.”

A “boulder train” is a term used by geologists to describe a series of rocks (known as “glacial erratics”) that were left behind by glaciers as they advanced across the landscape.  If the glacier came into contact with an economic deposits near the surface, it may break off pieces and transport them to a new location. Here the company has identified arsenic and tungsten within these boulders which are two indicators of potential gold mineralization. Geologists use glacial drift prospecting to trace the path travelled by these boulders back to it’s source.

Their reference to “sericitic, sheared and deformed” rocks is an indication that the rocks came from a shear zone – an area of structural deformation. These types of structural weaknesses are associated with many gold deposits in this region.

Harte Gold has commenced a Phase 2 IP program to cover the north and south extensions of the recently discovered IP targets with an additional 30 kilometer line survey. The Phase 2 IP survey will be enhanced by the addition of a Magnetic Survey which will assist in the identification of geological structural controls in the survey area.

Magnetic Survey’s are used for measuring areas of high and low magnetism. Magnetic surveys can be performed either on the ground or in the air. Pyrrhotite is a magnetic mineral that can act as an indicator for gold and has been associated with some of the quartz veins on the property.

Harte Gold is preparing a drill program for this summer to test the shear zones and IP anomalies. This drill program will be preceded by comprehensive till sampling to test for pathfinder minerals and zero in on drill targets before the commencement of drilling. The drill program is anticipated to consist of approximately 6,000 meters in 40 drill holes which will test all newly identified anomalies.

The Induced Polarization (“IP”) surveys are being conducted under the supervision of Robert S. Middleton, P.Eng. Mr. Middleton is an “independent qualified person” for the purposes of National Instrument 43-101 Standards of Disclosure for Mineral Projects of the Canadian Securities Administrators and has verified the data disclosed in this release.

As of writing, Harte Gold Stock (TSX: HRT) is trading at a 52-week high of $0.15 and as near as we can tell the rally of the past few months is largely driven by buzz generated from the “peacock boulders” and their comparisons to Hemlo host rock. While comparisons can be exciting, its worth reminding ourselves that the methods described here represent very early stage exploration on this part of the project and that the best indicator of gold mineralization is gold itself.