Initially the company planned to drill 8,000 meters over the winter, but instead drilled nearly 15,000 meters in 40 holes. Exploration is a huge expense, but necessary for finding the higher grades in a softened gold market.

TORONTO, ONTARIO–(Marketwired – June 2, 2014) – Detour Gold Corporation (TSX:DGC) (“Detour Gold” or the “Company”) reports assay results from its 2014 exploration drilling program in the Lower Detour Lake area located approximately 6 kilometres south of the Detour Lake gold mine on its 100% owned Detour Lake property. The Company extended its initial 8,000 metre drilling program to nearly 15,000 metres as a result of encouraging results and a longer winter drilling season. The Company completed 14,874 metres in 40 holes and has received assay results for all significant intersections of the program.

With the latest rally in nickel prices and buzz generated from Balmoral’s latest drill results to the inexplicably exciting boulders on Harte Gold’s property, the ancient “greenstone” belts of northwestern Ontario are getting some attention as of late. Detour Gold is a miner operating The Detour Lake Gold Mine about 80 km west of Balmoral’s Grasset project.

Detour Gold Mines has 100% ownership of the Detour Gold Mine, however Franco-Nevada  holds a 2% net smelter return on the mine property and Block A. The most recent preliminary assessment (February 2014) has estimated the proven and probable reserves of the Detour Gold Mine including it’s recent drilling on the Block A property at 476.4 Million tonnes at 1.02 g/t Au containing 15.55 Million ounces of gold. This latest round of drilling appears to have produced some significant results and we shouldn’t be surprised to see the company file an updated mineral resource estimate in the near future.

The Company has identified a significant mineralized system to the north of Zone 75 in following up a high-grade intercept of 17.3 g/t over 4.4 metres (DLD-13-075, last hole of the 2013 drilling program). This east-west mineralized zone (referred to as Zone 58N) was tested over a length of 450 metres by 28 holes totalling 10,888 metres. The mineralized system has a maximum width of 120 metres and narrows to less than 15 metres to the west and east. It has been tested from surface to a depth of approximately 300 metres and it remains open to the west and down dip. The gold mineralization is mainly found within the southern portion of a strongly sheared and altered feldspar porphyry intrusive containing quartz and/or quartz-tourmaline veins with up to 10% pyrite and multiple occurrences of visible gold. The results suggest that the grade and continuity of the gold mineralization may improve at depth.

The Detour Gold Mine is part of the Abitibi GreenStone Belt in Northeastern Ontario. Yesterday we talked about gold hosted in what are interpreted (by the company) to be ancient epithermal deposits with the Sugar Zone Property. The gold at the Detour Gold Mine is structurally hosted and more typical of what is found in this region. The project is located in a large ancient fault system known as the “Sunday Lake Deformation Zone (SLDZ)”. The SLDZ is a narrow corridor that extends for several hundred kilometres and trends east-west. The drill results in this release are from recent exploration of the “Lower Detour Deformation Zone”, a structural corridor 7 km to the south and running parallel to the SLDZ.

As with many gold deposits in this area, the gold is hosted in strongly sheared rock and associated with quartz veins, sulfide minerals and tourmaline. Tourmaline is a boron-bearing silicate mineral which is often associated with complex fluid chemistry. The presence of tourmaline is a good indicator of gold in these settings. When rocks are “sheared” due to high stresses, they may either break (brittle shear) or bend like plastic (ductile shear) or both. Hot, gold-bearing, hydrothermal fluids pass through the breaks, cracks and other weaknesses in the rock created by this shearing and may leave some of that gold behind.

“Confirming high-grade potential within trucking distance of the processing plant only after our second exploration drilling program and with minimal expenditures demonstrates the tremendous potential of our large land package,” said Paul Martin, President and CEO of Detour Gold. “Our team is excited about the prospects for success over the coming years. In the coming months, the Company will complete a detailed geological and structural interpretation exercise of the Lower Detour area in preparation for the next winter drilling campaign.”

Highlights from Zone 58N include (uncut assays reported) (from west to east):

Gold mineralization was also encountered in Zone 75 (20 to 50 metres south of Zone 58N described above). This mineralized zone is characterized by strongly sheared and altered mafic volcanics and feldspar porphyry dykes containing quartz veins and up to 25% sulphides.

Highlights from Zone 75 include:

The Company has also completed 3,985 metres in 12 holes testing mainly geophysical (IP) anomalies over a strike length of 5 kilometres in the Lower Detour area. With only partial assays available, only minor pyrite and/or pyrrhotite with no significant gold mineralization were encountered in the holes.

Initially the company planned to drill 8,000 meters over the winter, but instead drilled nearly 15,000 meters in 40 holes. Exploration is a huge expense, but necessary for finding the higher grades in a softened gold market. According to the news here, the company encountered significant gold mineralization in 25 of the 40 holes, mostly in Zone 58N.

Note that the intercepts here are only within 65 to 75% of the true width and do not reflect the true thickness of the mineralized zone.

The company tested some IP anomalies in zone 75, but didn’t encounter significant gold in most of the holes. Unfortunately, IP surveys don’t point out gold (if they did, there would be a lot of unemployed geologists), but instead highlight only those rocks that can hold a charge. Iron sulfide minerals such as pyrrhotite and pyrite are well known for their conductive properties, ability to hold a charge. In this area the sulfide minerals are also associated with gold, but apparently not always.

All drill hole data, including drill hole location map and cross sections are posted on the Company’s website under Projects/Detour Lake Exploration: Regional.

Detour Gold’s drilling program is being managed by its Exploration Manager, Guy MacGillivray, P.Geo., a Qualified Person within the meaning of National Instrument 43-101. Mr. MacGillivray has verified and approved the data disclosed in this release, including the sampling, analytical and test data underlying the information. The true width of the reported intercepts is estimated to be 65 to 75% of the drilled length. No significant gold mineralization was intersected in the other drill holes. Samples are prepared at ALS Laboratories in Timmins and Sudbury and assayed at their Vancouver, B.C. laboratory. Analysis for gold is done on sawn half core samples (size NQ) using 50 grams fire assay (AA finish). Samples with higher grade gold (>3 g/t) or with visible gold are re-assayed using the pulp and metallics procedures. The Company’s quality control checks include the insertion of standard reference materials and blank samples to monitor the accuracy of the assay data.

Despite some interesting drill results, Detour has some challenges. They lost $0.38 per share in the first quarter of this year and as of May 2014 are facing an $80 million class-action lawsuit by unhappy investors.  The company is currently trading at $10.15.

Detour Gold is an emerging mid-tier gold producer in Canada. In 2014, the Company is completing the ramp-up of its 100% owned Detour Lake mine to a long life, large scale open pit operation. 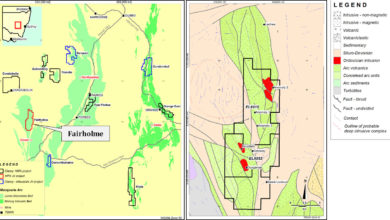