Many companies are now getting stuck with small or moderate resource reports and no cash to continue exploration. Luckily for Sabina, they have the cash to sustain their work and have been continuously working to expand the size of a potential mine at Back River.

VANCOUVER, BRITISH COLUMBIA–(Marketwired – Oct. 7, 2014) – Sabina Gold & Silver Corp. (the “Company”) (TSX:SBB) is pleased to provide a progress report on optimization work currently being undertaken as part of the Feasibility Study (“FS”) being prepared on the Company’s 100% owned Back River Gold Project, (“Back River”) or (the “Project”) Nunavut, Canada.

Sabina Gold and Silver (formerly Sabina Silver) has a number of projects in Canada’s far north, the most advanced of which is the Back River Gold Project. The Back River property was discovered in 1982 during a reconnaissance exploration program performed by a group known as the “Back River Joint Venture” after which it was explored and slowly advanced by several different firms. Sabina acquired the property in 2009 from Dundee Precious Metals (DPM).

The project itself consists of several different properties and deposits including the Goose, Llama, Umwelt and George deposits. The current mine plan calls for both open pit and underground operations.

The FS, launched in June of this year, is being completed by a team of highly qualified engineering and environmental firms: JDS Energy and Mining Inc. (lead), Hatch, SRK Consulting, Knight Piesold Ltd., and AMC Consultants Pty Ltd. All of these firms have extensive recent Arctic experience.

“Our studies for the Back River FS are very much on track,” said Rob Pease, President & CEO “the Pre-feasibility Study (“PFS”) was a snapshot in time and enabled us to identify strategies to optimize the Project. While final results and economics for the FS are not expected to be completed until the first half of next year, we are very encouraged by our progress so far and believe with the volume of additional information we now have, that Back River is going to be a compelling project. We are also very fortunate to have what we believe is the best Arctic team in Canada working on the Project. Our consultants all have significant Northern experience in design, construction, operations and permitting which will bring relevant hands-on credibility to the FS.”

As project’s advance from exploration and development, several types of studies are commissioned to determine the economic potential of a possible mining operation. Scoping Studies and Preliminary Economic Assessments are early stage studies that offer the lowest level of accuracy and detail, but are completed for a relatively low cost. Pre-feasibility (“PFS”) and Feasibility Studies (“FS”) are successively more accurate and more expensive, but offer a more accurate picture of what an operation might look like. Feasibility studies typically cost between 0.5% to 1.5% of the total project cost.

After completion of the PFS announced in October 2013, a number of opportunities to enhance Project economics in the FS were identified and work has progressed in these areas (some of which were announced earlier this year):

In their 2012 PEA, the company reported 23.2 million tonnes indicated 9.3 million tonnes inferred at 5.6 g/t gold. Earlier this year these resources were upgraded through further drilling to:

This is a slight tonnage improvement over the previous report, but the primary gain is the upgrade of Indicated Resources to the more confident Measured category.  The company is reporting today that it expects further increases. It’s not uncommon for a company to initially place it’s focus on a smaller more well-explored area of a deposit in order to clear those first resource and reporting hurdles. In a hot (or even warm) mining market a reasonably positive PEA or 43-10 compliant resource would be enough for a company to get cash to support further work and expansion of a potential deposit, but many companies are now getting stuck with small or moderate resource reports and no cash to continue exploration. Luckily for Sabina, they have the cash to sustain their work and have been continuously working to expand the size of a potential mine at Back River.

Detailed engineering on these concepts is ongoing and Project economics are not yet available. Readers are cautioned that until the FS is completed, the implications of these concepts on the Project, including on Project economics, will not be fully understood. Results will be used to support the FS which is expected to be completed in the first half of 2015.

The Back River project consists of gold hosted in “banded iron formations”. Banded Iron Formations, or BIF’s are important iron deposits in many parts of the world. All the world’s known iron formations are virtually the same age and are thought to have occurred during the oxygenation of the the Earth’s atmosphere about 2.4 billion years ago.

On January 22, 2014, the Company submitted the Back River draft Environmental Impact Study (“DEIS”) and associated water license application for the Project to the Nunavut Impact Review Board (“NIRB”) and the Nunavut Water Board. The DEIS presents scientific and community based knowledge that determined key aspects of the natural and socio-economic environments in the region. Project interactions were identified; residual effects assessed and proposed mitigation and monitoring plans developed for the construction, operation and closure of the Project. In February 2014, the Company received notice from NIRB that the Back River DEIS conformed to the environmental assessment guidelines. In March, 2014 the Company received information requests from the technical review process. On July 23, 2014, the company submitted its information request responses to NIRB. On July 31, 2014, NIRB advised that the Company’s submission was conformant and that meetings for the technical review process had been set for November 13-15, 2014, and the pre-hearing conference was set for November 17-19, 2014 in Cambridge Bay.

The Back River Final Environmental Impact Statement (“FEIS”) will be informed by the FS early next year and is expected to be submitted to NIRB during the third quarter of 2015.

Environmental impact studies and the building of good will and “social license” are crucial for successful mining operations. Our recent discussions of Polymet’s permitting process and the disaster at Mount Polley highlight the often cumbersome, but necessary processes of building consensus among stakeholders. (Note: Watch for our upcoming article on social license in mining projects.)

It is anticipated that the Company will end 2014 with approximately $30 million in cash. Sabina remains well funded to take the Project through completion of the FS and the environmental assessment process. The Company forecasts that its cash balance after completion of the FS and the FEIS would be approximately $23 million (at the end of 2015 and not including any field work that may be required to complete the FEIS).

Management is currently informally exploring project financing alternatives and opportunities. While the Project is expected to be substantively de-risked by the end of 2015, (with the FS and environmental assessment completed), subject to the results of the FS and FEIS, the Company would start construction of the Back River Project at an appropriate time once financing is secured on satisfactory terms in a manner which is in the best interests of all shareholders.

Wes Carson, P.Eng. and Vice-President, Project Development for Sabina Gold & Silver Corp. is a Qualified Person under the terms of NI 43-101 and has reviewed the technical content of this press and has approved its dissemination.

Any time a project in the far north comes up for discussion the same three issues surface: Cost, cost and cost. It’s ridiculously expensive to operate up north. Long, cold winters and remote operations make for a logistical nightmare and because of this, mining projects must be exceptional in order to survive. Couple that with the current state of the market and you find yourself edging towards the “miracle” end of the spectrum. Mind you, Sabina itself is something of a miracle. They’ve managed to publish both a PEA and a PFS in two of the worst resource market years in recent history, and by all accounts have the cash to keep drilling and advancing the project. A full feasibility study on Back River is expected in the first half of 2015.

Sabina is currently trading at $0.51.

Sabina’s primary assets, all located in Nunavut, consist of: the Back River Gold Project, currently in the feasibility and permitting phase; the Wishbone Claims, a vastly prospective grass roots project; and the Hackett River Silver Royalty, a silver production royalty on Glencore’s Hackett River project comprising 22.5% of the first 190 million ounces produced and 12.5% of all the silver produced thereafter. 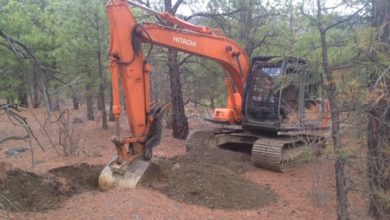