The Baldy target has been defined as an area of interest due to mineralization identified in float (loose rock) material near the surface.  For the geologist, float samples represent clues that may – or may not – lead a mineralized bedrock source.

NV Gold Corporation (TSX VENTURE:NVX) (the “Company” or “NVX”) is pleased to announce it has received the necessary permits to begin its first drill program at the Rattlesnake Hills Project (“Rattlesnake”), which is held under an option to purchase a 100% interest from Evolving Gold Corp. (“EVG”). Drilling is expected to begin by August 6, 2014. The purpose of the drilling program is to explore two identified targets of mineralization, outside the previously explored core area.

This is the first time for we have covered an exploration company working out of Wyoming, USA.  Within the United States, Wyoming is known for its coal reserves and produces up to 39% for the country. It is also the 8th largest producer of oil and gas and one of the largest producers of uranium in the United States. The states other minor commodities include gold, rare earth elements (REE) and gemstones (nephrite jade, diamond and opal).

NV Gold is a junior exploration company actively exploring for gold within Wyoming. In March the company cut a deal on the Rattlesnake property with Evolving Gold Corp which could see them acquire 100% of the property for $3.5 million along with 3 million common shares over the next two years. This news release is the first announcement that the company has begun it’s first drill program on the property. While past work has focused on two prospects the Antelope and the North Stock, the company plans on exploring two identified exploration targets known as the Baldy and Blackjack targets. NV Gold also holds a 100% interest in the Afghan-Kobeh gold property which is located in Eurkea County, Nevada located within the prolific Carlin gold district.

The drilling program is expected to consist of 12 to 16 reverse-circulation rotary (RC) drill holes for a total of between 1,600 and 2,000 meters. Two targets are planned to be tested, Blackjack and Baldy (Bald Mountain). Both targets are distal to the previous discoveries at North Stock and Antelope Basin, with the Baldy target lying about 4 kilometers to the northwest of North Stock and Blackjack approximately 8 kilometers to the west. Previous work at Rattlesnake has almost entirely been centered on the two discoveries, with little drilling outside this core area. The Rattlesnake land position is substantial, totaling almost 54 square kilometers, most of which remains under-explored.

The company is planning a 1,600 to 2000 meter RC drill program to confirm the mineralization located beneath the Baldy and Blackjack targets. RC drilling is a fast, low cost method for drilling near surface targets. These types of drill programs are also effective when testing targets that are hidden below thick layers of soil and sediment.

With the commencement of drilling, the Company is terminating the offering of Units it announced on July 10, 2014, having raised Cdn$402,700 to fund this exploration program, property maintenance costs and general corporate expenditures.

The Baldy target was initially recognized by Newmont Mining, operating under a joint venture with Canyon Resources in the mid-1990s. No follow-up work or drilling was performed at that time. EVG did additional sampling in 2010 and 2011, but again, no drilling was undertaken. NVX completed more detailed sampling this year, which was quite encouraging.

Although there is little actual outcrop at Baldy, soil cover is shallow and float samples reveal very exciting mineralization on the surface. The mineralized float has been sampled over an area of approximately 100 meters by 100 meters, but is obscured by recent sediments to the north and east. The observed mineralization differs from that present at North Stock and Antelope Basin as mineralization is hosted in a coarse, Cambrian-age sandstone in proximity to a phonolite intrusive body. Gold, silver and copper values sampled to date have ranged up to +30g Au, +2,000g Ag and +6% Cu. The Company wishes to caution readers that, since the samples are all float samples, it is not possible to correlate volume, true widths or grades from the information collected. Six to eight holes are planned in this area, totaling approximately 500-600 meters.

The Baldy target has been defined as an area of interest due to mineralization identified in float material near the surface. Float is a term to describe large loose rocks that were broken off from bedrock and (possibly) transported by natural forces such as water or ice. Although the company has identified high grade mineralization in the float, the material may have transported a fair distance. In some cases, drift prospecting methods, may be useful identifying where the mineralized float originated. Geologic maps may also help identify the most likely source of the rock type. As the company states, these results only represent near surface material and cannot be used for resource estimates. For the geologist, float samples represent clues that may – or may not – lead a mineralized bedrock source.

The Blackjack Target is a large gold anomaly that straddles a regional-scale east-west normal fault. A volcanic breccia thought to be a vent breccia borders the fault to the south, with Precambrian granites and gneisses to the north. Although soil and rock chip results are strongest in the brecciated volcanic rocks on the south, the Precambrian units also show evidence of potassic alteration and gold mineralization.

A 43-101 independent field study filed by in March 2014 identified the rattlesnake property as an alkaline porphyry-type magma system. A fundamental concept in understanding the geologic history is uniformitarianism: That the same natural processes occurring today also occurred in the past. Most porphyry deposits we have discussed are considered geologically relatively young (formed several hundred million years ago), however it is likely that the types of deposits identified on the rattlesnake property may have developed 1-2 billion years ago. Current understanding of these young deposits can be applied to aid in the exploration of older porphyry systems such as this one.

Some samples identified within the Blackjack target contain “potassic alteration”, this type of alteration usually forms in high temperature environments within these porphyry systems and has strong potential to contain mineralization (in this case it’s gold).

The initial drilling at Blackjack will be mostly confined to the volcanics south of the North Granite Mountain fault. In this area, 6-9 holes are planned totaling 1,200-1,400 meters.

The anomaly identified at Blackjack is large, measuring approximately 300 m x 450 m, making it larger than the anomaly measured at North Stock prior to its first drill holes. A soil grid covering and area of 2,000 m x 1,500 m was completed by Agnico Eagle Mines Limited in 2011 that confirmed the presence of this anomaly, but no drilling was performed. NVX drilling in 2014 will be the first drill test of the target.

Soil sampling is usually the initial stage of sampling; a very shallow sampling technique (10-50 cm or 3-20″) to identify any underlying mineralization that has leached into the soil. Previous work by Agnico Eagle mines first identified the Blackjack anomaly but no further field work was completed. This is NV golds first attempt to test the ground.

NVX President and CEO, John Watson, commented, “Although there has been over 70,000 meters of DDH drilling on Rattlesnake to date, very few holes have been attempted outside the two known gold zones. Baldy and Blackjack are distal to these main zones and could provide support for the presence of a district-scale gold system in the mold of other alkalic volcanic centers in the western US and Canada.”

All scientific and technical information in this news release for the Rattlesnake Hills Project has been reviewed and approved by Michael B. Ward, P.Geo, who is a Qualified Person under the definitions established by Canadian National Instrument 43-101.

About the Rattlesnake Hills Project

With nearly 70,000 meters of diamond drilling completed on the rattlesnake property it’s surprising past workers have not completed a 43-101 compliant mineral resource estimate. Perhaps NV Gold will be the company to advance this project and draw some new attention to Wyoming’s gold potential.

Rattlesnake is located in Natrona County, Wyoming, USA. Recent drilling, since 2008, is comprised of 182 drill holes totaling 71,083m. Two deposits have thus far been identified: North Stock and Antelope Basin. North Stock is about 400m by 200m wide, trends north-northeast, and is open in selected areas at depth and along strike. Mineralization has been drilled to as far as 500m below the surface. Mineralization at Antelope Basin has been identified in an area of 200m by 350m to a depth of at least 200m, trends northeast, and is open along strike.

Rattlesnake has been the subject of previous work by several operators, including, most recently, EVG and Agnico-Eagle Mines Limited. The Rattlesnake land package is comprised of 644 lode mining claims covering approximately 5,235 hectares and Wyoming State leases covering an additional 515 hectares.

Previous work by all operators on Rattlesnake is extensive, including 228 drill holes (mostly core), totaling nearly 77,000 meters. Core from drilling in the past six years has been retained by NVX in Casper, Wyoming. Additionally, various surface and airborne surveys have been completed, along with extensive surface work programs (e.g. mapping, soil sampling, chip sampling). To date, no NI 43-101 compliant resource calculation has been completed on Rattlesnake. 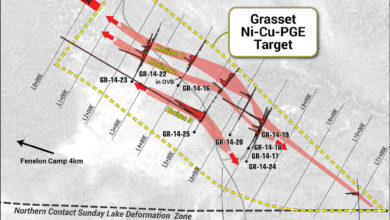