Like many other junior nickel explorer’s, their stock has increased along with the price of nickel. Nickel prices have been up significantly since Indonesia banned nickel ore exports earlier this year.

VANCOUVER, BRITISH COLUMBIA–(Marketwired – June 19, 2014) – North American Nickel Inc. (TSX VENTURE:NAN)(OTCBB:WSCRF)(CUSIP:65704T 108) (the “Company”) is pleased to announce that drilling has commenced at their 100% owned Maniitsoq nickel-copper-PGM sulphide project in South West Greenland. The 2014 drill program will employ two diamond drill rigs targeting existing prospects and regional targets along the Greenland Norite Belt. In addition to drilling, other activities will be ongoing to develop new target areas within the very large property package being explored.

It’s been a while since we reported on North American Nickel’s Maniitsoq nickel project in Greenland. The company  just recently announced they will begin diamond drilling and they should be receiving the results from recent geophysical surveys during this year’s exploration.  Until recently not many mining companies had been paying attention to Greenland, but other discoveries above the Arctic Circle and the country’s receptive stance towards resource development have led to a number of interesting discoveries including gold, ruby, iron, REE, uranium and nickel deposits. This not surprising considering vast size of the country.

The geology at Maniitsoq bears a resemblance to other magmatic nickel–copper–platinum group metal sulfide deposits that originated from meteor impacts and the company believes that this particular deposit may be related to a meteor impact 3 billion years ago. Upon impact, deep-sourced nickel-rich magma would have travelled to the surface through fractures and conduits. The Sudbury basin (Ontario, Canada) and Bushveld Complex (South Africa) are two world famous meteor impact structures to host nickel-copper and PGM mineralization.

North American Nickel was previously known as Widescope resources before the company changed it’s name in April 2010. Widescope began as a gold explorer, working out of Bisset, Manitoba before moving towards nickel exploration in the Sudbury basin as North American Nickel. The company’s familiarity with the geology at Sudbury should benefit their exploration efforts at Maniitsoq.

The first drill is focused on the Imiak Hill Conduit Complex (“IHCC”) and more specifically on the Imiak Hill zone where previous drilling intersected 4.31% Nickel, 0.62% Copper and 0.14% Cobalt over 18.62 metres core length in hole MQ-13-026 (See NAN announcement dated October 10, 2013). The zones at IHCC remain open at depth, and the 2014 drilling will test the down plunge potential of these nickel-copper-PGM systems. The deepest mineralized intersection to date on the property is in hole MQ-13-028, which reported 3.19 Ni and 1.14% Cu over 24.75m, at depth of approximately 185m from surface (See NAN announcement dated November 5, 2014).

The second drill is scheduled to start in about three weeks and will begin in the Pingo target area, located approximately 25 kilometers northwest of the IHCC. The 2013 Heli borne VTEM survey identified high priority sub surface conductors at Pingo, which are coincident with NAN’s surface sampling and historical exploration results; both have documented anomalous nickel sulphide mineralization in noritic rocks.

All diamond drill holes will be surveyed using a 3D (ZXY) borehole pulse electromagnetic system operated by Crone Geophysics and Exploration Ltd., which detects sulphide mineralization up to 100 metres away from the hole, as well as assisting with defining intersected conductor or zone parameters. This method has been utilized over the last two years of drilling at Maniitsoq and has assisted the geological team in understanding the mineralized systems at IHCC.

Crone Geophysics has completed 936 gravity stations, with 627 completed at IHCC and 309 completed at Fossilik. The survey was successfully completed and the crew has returned to Canada. The gravity data is being interpreted by Magma Geoscience Inc. and results are expected in July 2014.

Gravity surveys are useful for detecting massive to semi-massive sulfide bodies due to the difference  in density between the sulfide body and the surrounding rock.

All technical information in this release has been reviewed by Dr. Mark Fedikow, P.Geo, who is the Qualified Person for the Company and President, North American Nickel Inc.

North American Nickel is currently trading at $0.43 near it’s 52-week high of $0.47. Like many other junior nickel explorer’s, their stock has increased along with the price of nickel. Nickel prices have been up significantly since Indonesia banned nickel ore exports earlier this year.

The Maniitsoq property in Greenland is a Camp scale project comprising 3,601 square km covering numerous high-grade nickel-copper sulphide occurrences associated with norite and other mafic-ultramafic intrusions of the Greenland Norite Belt (GNB). The >75km-long belt is situated along, and near, the southwest coast of Greenland, which is pack ice free year round.

The Post Creek/Halcyon property in Sudbury is strategically located adjacent to the past producing Podolsky copper-nickel-platinum group metal deposit of KGHM International Ltd. The property lies along the extension of the Whistle Offset dyke structure. Such geological structures host major Ni-Cu-PGM deposits and producing mines within the Sudbury Camp. 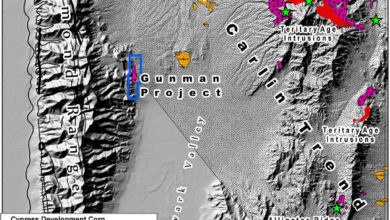