With NexGen’s recent results looming large, other companies looking for uranium in and around the PLS project are suddenly feeling a lot of pressure to have similar successful drill results.

VANCOUVER, BRITISH COLUMBIA–(Marketwired – March 13, 2014) – NexGen Energy Ltd. (TSX VENTURE:NXE) (“NexGen” or the “Company”) is pleased to announce the discovery of further new zones of uranium mineralisation within a second hole (RK-14-27) in the Arrow prospect, Rook 1 project in the SW Athabasca Basin, extending the known zone of uranium mineralisation down dip and along strike.

NexGen’s Arrow prospect is part of their Rook 1 uranium project located just to the northeast of the Fission’s PLS (Patterson Lake South). Intersections of high grade uranium in multiple zones last month sent their stock soaring from $0.225 to over $0.50 where it still sits. With NexGen’s recent results looming large, other companies looking for uranium in and around the PLS project are suddenly feeling a lot of pressure to have similar successful drill results. We included a map of NexGen’s Athabasca land positions below.

Andrew Browne, NexGen’s Vice-President, Exploration and Development, commented, “The structural interpretation of uranium mineralised zones at Arrow has been validated. We are greatly encouraged by this confirmation of both along strike and down dip extensions, and by the preliminary thickness and strength of the radioactivity. Further drilling at Arrow is designed to continue to confirm the strike and dip extent of this newly discovered uranium mineralised prospect.”

Leigh Curyer, NexGen’s CEO commented, “Andrew Browne, James Sykes and Matthew Schwab (the core NexGen technical team) have done a terrific job in only the 5 holes drilled to date at Arrow. The arrival of a third drill rig for the summer program will significantly expedite the results and potential of Arrow and the other identified geophysical targets on the western section of Rook I.”

As previously reported, the Arrow zone is structurally complex, with a range of basement lithologies having variable competency contrast. Hole 21 suffered a deviation from its planned trace apparently due to a combination of boulders in the glacial overburden and foliated basement. Holes RK-14-24, -25, and -26 were planned and drilled to ascertain the orientation of the dominant mineralised structures. While no major radiometric zones were intersected, analysis of structures in these holes meant that hole -27 was successfully planned to intersect the interpreted mineralised zones both along strike and down dip. The next follow up hole, RK-14-29, is planned a further 40m SW along strike to again intersect the interpreted mineralised Arrow zones.

The company is telling us that holes 24, 25 and 26 did not encounter significant mineralization, but allowed them to better develop their target for hole 27. This is fairly typical in early exploration. While companies can rarely get lucky and hit something significant on every hole, more often their step-out holes help them with target refinement by showing them what’s not there and helping the geologist better understand the subsurface geology.

Hole RK-14-27 has been probed radiometrically, using a Mt Sopris 2PGA-1000 total count natural gamma scintillometer probe (Fig 4). The significant radioactive zones have been measured using a hand-held Radiation Solutions Inc RS-125 spectrometer (Table 1), and this has confirmed that all radiometric activity is due to uranium. Currently, NexGen defines “significant” as a minimum of 5cm greater than 500 cps (counts per second). Note that the Radiation Solutions RS-125 spectrometer now used for core scanning is a different instrument to the Exploranium GR-110 previously used. The RS-125 spectrometer has a larger detector crystal than the Exploranium GR-110, but the total count gamma scan readings in counts per second (cps) are in the same range and it is used for qualitative indications of radioactive anomalism.

Hole RK-14-28 is in progress, and is designed to intersect the cause of the gravity low at Arrow.

The map below shows the drill hole locations over the gravity survey of the area. Gravity surveys identify density contrasts in the subsurface and help identify subsurface structural features or lithology (rock type) changes. NexGen is drilling hole RK-14-28 in the center of a gravity low, while other holes are designed to intersect the known mineralized zones. Note that even though this is a top view of the map, the drill holes are shown as lines on the map representing the horizontal extent of the drill holes which are drilled at angles from the surface.

Values greater than 10,000 (off scale) would be expected in a zone containing veins or masses of visible pitchblende like that shown in the core image above. Pitchblende is a black uranium-rich ore mixture primarily containing the mineral uraninite (UO2).

Natural gamma radiation in drill core reported in this news release was measured in counts per second (cps) using a Radiation Solutions Inc RS-125 gamma-ray spectrometer, and a Mt Sopris 2PGA-1000 natural gamma probe. The reader is cautioned that total count gamma readings may not be directly or uniformly related to uranium grades of the rock sample measured; they should be used only as a preliminary indication of the presence of radioactive minerals. All intersections are downhole. Core interval measurements and true thicknesses are yet to be determined.

We mentioned this earlier, but take note of the company’s disclaimer in bold. These results are not assays, but indications of radioactivity. True assay will likely follow as they become available. Also note that the reported widths are the “apparent thicknesses” measured along the drill core length and not true thicknesses.

Andrew Browne, FAusIMM(CP), NexGen’s Vice President, Exploration & Development, is a “qualified person” for the purposes of National Instrument 43-101 – Standards of Disclosure for Mineral Projects, and has reviewed and approved the contents of this news release.

NexGen is a British Columbia corporation with a focus on the acquisition, exploration and development of Canadian uranium projects. NexGen has a highly experienced team of exploration professionals with a track record in the discovery of unconformity-style uranium deposits in Canada. 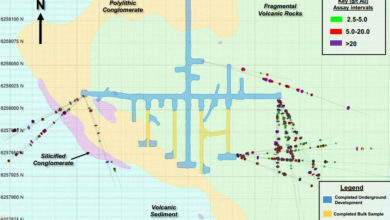