There has always been heated debate around the subject of Antarctica as a mineral resource. While the exploitation of mineral resources in Antarctica is prohibited by the Antarctic Treaty with 54 states party so far, governmental bodies of leading countries are spending huge resources on performing research there. For the last two decades, the geoscience research interest and activities in West Antarctica have been constantly growing. For instance, NERC (Natural Environment Research Council), which is a funder of research, training and innovation in environmental science in the UK has spent £66.3m on Antarctic logistics and infrastructure partition, construction of a polar research vessel RS Sir David Attenborough as well as equipment, labs and research centres during 2016-2017. The budget for the same purposes increased by £44m for 2017-2018. These numbers don’t include annual budget of BAS (British Antarctic Survey) which is around £50m. This article takes attempts to explain why earth sciences research in the Antarctica is important and which mineral resources are likely to be present in its better exposed western part, notably the Antarctic Peninsula. This article relies on recent analytical data of the author’s research associated with Cenozoic magmatism on the Antarctic Peninsula.

Antarctica – is it unique?

Geologically, East Antarctica (also known as the Greater Antarctica) is made of Precambrian rocks (4.6 billion to 541 million years old), while West Antarctica consists of mostly younger Mesozoic-Cenozoic (younger than 252 million years) and Paleozoic (541-252 million years) rocks. The latter part of the continent is separated from the East Antarctica by a mountain range of sedimentary rocks called Transantarctic mountains, which are stated to host PGE (Platinum Group Elements) and related metals associated with the Dufek layered mafic intrusion (Mesozoic).

The Archean shield of East Antarctica contains numerous mineral occurrences of several types, resembling those found on other similarly aged shields of Gondwana – an ancient supercontinent which broke up about 180 million years ago. Precambrian rock sequences which would have been adjacent to Antarctica at the time of Gondwana are known to host Au-U (in the conglomerate of Witwatersrand, South Africa), PGE and Cr-Ni-V (in Bushveld layered gabbroic intrusion) as well as Fe-Mn deposits (in Archean banded iron formations). A principal reason for enormous interest in Antarctica lies in countless successful comparisons with these mineral-rich belts found on other Gondwana continents. The east coast of East Antarctica, specifically from Wilkes Land to Enderby Land, is stated to include banded iron formation (BIF) rocks, which are typically mined for Fe. However, an average Fe content in magnetite here is 33 wt%, which is lower than most world standards (>46 wt%).

The northern and central parts of the Andean magmatic belt, extending northward from Antarctic Peninsula to South America, are known to be associated with Fe-Cu-Sn deposits. Despite the fact that economic concentration of metallic minerals is not yet discovered in the Antarctic Peninsula, the mineral occurrences here are so abundant that these areas would undoubtedly be the sites of intense drilling and prospecting if located on other continents. The latter is one of the reasons to claim that Antarctic Peninsula holds the best potential for mineral resources on the continent.

Mineral occurrences in the Antarctic Peninsula

The most significant types of mineral occurrences present on the Antarctic Peninsula and the adjacent islands are the following:

Many researchers have concluded that the most favourable economic deposits in Antarctica would be porphyry copper deposits in the Antarctic Peninsula.

The porphyry copper mineralisation forms an elongated belt along the west coast of the northern part of Antarctic Peninsula and its adjacent islands. As a rule, these deposits form large mineralized systems (chalcopyrite, bornite, molybdenite, pyrite) that originate from the magma intrusion and subsequent hydrothermal activity associated with it’s emplacement. The reaction between the porphyry and the wall rocks leads to the formation of large alteration aureole around it with typical potassic alteration present at the center (quartz, K-feldspar and biotite), phyllic alteration (quartz and sericite) next and propylitic (epidote, chlorite, calcite) alteration being the furthermost. All of these alteration zones are identified at several localities across the Peninsula. The occurrences of porphyry copper style mineralization is identified on Argentine Isl, Livingston, Anvers and Adelaide Isl. The typical ore minerals assemblages include veinlet and vein magnetite, pyrite, chalcopyrite, and molybdenite.

The Transantarctic metallogenic province includes platinum and other metals associated with the Dufek layered intrusion. The East Antarctic iron metallogenic province includes banded iron formation rocks located along the east coast. In West Antarctica, the Andean metallogenic area has the potential for porphyry copper style mineralisation and Ti-V-Cr deposits associated with layered gabbroic intrusions. While only a few exposed areas of Antarctica are considered to be potential mineral exploration targets, it’s worth noting that less than 0.18% of the Antarctic is exposed rock. That, combined with the vast mineral wealth of it’s former Gondawanan neighbours, suggests a great exploration potential. Despite the fact that commercial mining in Antarctica is prohibited until 2048, human demand for metals, specifically Ti-V-Cr, has increased over time. With increasing competition for resources, it’s likely only a matter of time before nations begin to stake their claims in the Antarctic. 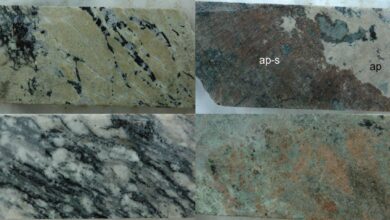 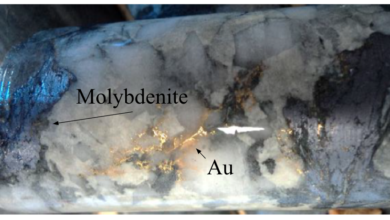