Finding an extension of the same rock unit that hosts gold in a nearby deposit is definitely worth follow-up, but it doesn’t necessarily mean that it contains economic quantities of gold.

Carlin Gold Corp is a junior exploration company that has been exploring for Carlin-type gold deposits in Nevada, USA since 2005. The company is currently working on it’s Cortez Summit property that is within striking distance of past producers and recent discoveries. This release pertains to it’s recent geologic assessment of a hole that was drilled last fall.

In September-October 2013 the Company re-entered vertical reverse circulation hole CS12-2 and deepened it by core drilling. Carlin geologists were encouraged that the core hole established the presence of favorable ‘Lower Plate’ rocks and retained the services of Dr. Harry Cook, President/CEO of Carbonate Geology LLC to review the core. Dr. Cook is a well known geologist specializing in carbonate stratigraphy in the major gold districts in Nevada and is very familiar with the Cortez area. He has been acknowledged for his role in developing an understanding of the gold-hosting Paleozoic stratigraphy, including the neighboring Goldrush discovery. Dr. Cook examined the lower 984.5 feet (300 m) of the core hole CS12-2C and interpreted the bottom 650 feet (198 m) of the hole to contain Devonian age strata.

If a drill hole is properly capped and cased, it is possible for exploration companies to return to them for future drilling. Carlin Gold Corp deepened one of its vertical reverse circulation (RC) drill holes in September 2013 and recently engaged an area expert to examine the samples from that hole.

Dr. Cook states that “Core CS12-2C strata are comprised of very favorable gold-host rocks within both the Wenban Formation and Horse Canyon Formation. These strata are coeval (of the same age) with the nearby Wenban Formation and Horse Canyon Formation carbonate gold-host strata that comprise the gold hosts in Barrick’s Goldrush Discovery.” Dr. Cook’s interpretations of the core are based on fossil and sedimentologic observations in context with his extensive field, pit and core experience at many locations and mine sites throughout Nevada. Additional drilling is recommended by Dr. Cook.

Barrick Gold’s “Gold Rush” discovery is located approximately 6km south of the Cortez Summit property. According to the company, Dr. Cook is suggesting that the rocks drilled on the Cortez property are of the same type and formed at the same time as the rocks identified on the GoldRush property. What does this mean? Finding an extension of the same rock unit that hosts gold in a nearby deposit is definitely worth follow-up, but it doesn’t necessarily mean that it contains economic quantities of gold. Gold is this region was deposited along structural weaknesses formed by tectonic activity long after the formation of the sedimentary rocks that host it – so the same rock unit may not host gold throughout. Still, it’s a target worth exploring.

K. Wayne Livingstone, President/CEO of the Company, commented: “The information Dr. Cook has provided indicates that Carlin’s core hole intersected the stratigraphic section containing the main gold-bearing horizons as the neighboring Goldrush discovery. This is important as it clearly demonstrates the exploration potential of the project and helps to set the stage for additional drilling evaluation.”

Hole CS12-2C was deepened by core drilling from 1,760 ft. (537 m) to 4,032 ft. (1,229 m) and contains short intervals of anomalous gold values to 0.667 grams per tonne, along with longer intervals of anomalous arsenic values greater than 100 ppm in the Devonian Lower Plate section. These core also display Carlin-style alteration features such as decalcification, clay alteration, and calcite veining.

The company is reporting that the deepened drill interval contained some gold and elevated arsenic levels. Arsenic occurs in the iron sulfide mineral arsenopyrite and is prospective for gold.

The 2012 reverse circulation drill program of seven vertical holes, totaling 11,720 feet (3,573 m.) ranging in depth between 1500 and 1800 feet (450 and 550 m.), encountered Paleozoic sedimentary rocks which are now considered to be structurally and stratigraphically above the calcareous Lower Plate units. Short intervals of anomalous gold up to 0.534 grams/tonne with Carlin-type pathfinder elements were present in six of the seven holes drilled. Two holes with the longest anomalous arsenic intervals were drilled 1,900 feet (580 m) apart, and are located in close proximity to the projected Fourmile structural zone, a north-northwest trending corridor which trends for 4,500 feet (1,370 m) along the west side of the Property. This structural corridor will be targeted in future drilling.

In addition to the recent geological studies, the Company has reviewed existing ground and airborne geophysical survey data in an effort to enhance future drill targeting. This information has been helpful in defining several structural zones of interest on the property, including the Fourmile structure.

The company has looked over their airborne geophysical data to aid in drill planning. Some examples of surveys used on Carlin-type gold deposits include Induced Polarization (IP) and ground magnetic surveys.

Cortez Summit is centrally located in Eureka County on the Cortez Trend, in the middle of what has become the most active gold exploration area in Nevada. The 100% owned Property consists of 142 unpatented claims located in the southern Cortez Mountains between the historic Buckhorn and Horse Canyon mines. The east edge of the Property lies 2/3 mile (1 km) west of the Buckhorn mine, and the west edge of the Property lies 1.5 miles (2.5 km) east of the Horse Canyon mine. Barrick’s Cortez Hills operation (11 million oz gold pre-production reserve/resource) lies 4 miles (6.4 km) west of the Property. The Goldrush discovery has grown rapidly since the initial announcement on September 7, 2011, and as of December 31, 2013, the estimated measured and indicated resources reported by Barrick stood at 10.0 million ounces, with a grade of 0.132 oz. per ton gold (4.5 grams/tonne) and the inferred resource was estimated to be 5.6 million ounces, with a grade of 0.141 oz. per ton gold (4.8 grams/tonne). The mineralization is open in several directions and the currently defined northern extent lies adjacent to the west side of Cortez Summit.

Barrick has announced they are advancing their Goldrush Project through the prefeasibility stage, scheduled for completion in mid-2015. Barrick has reported encountering deep mineralization along the northern extension of the Goldrush, including an intercept of 103 feet (29 m.) containing 0.725 oz. per ton gold (24.9 grams/tonne) and have applied for a permit to construct an exploration decline in order to better define the existing resource and to test for additional mineralization to the north (Barrick Q2 2014 Report). Surface infill drilling continues.

It’s pretty standard for junior mining companies to try and bolster their own prospects by drawing comparisons to successful neighbors. It certainly doesn’t hurt to have successful neighbors: Many successful mining districts have been are built on clusters of “me too” explorers surrounding a big discovery. While this may give potential investors an idea of the potential upside, it’s also important to differentiate between what a company has done and what their neighbours have done.

Barrick’s Gold Rush project is currently in the prefeasibility stage.

There hasn’t been much news from Carlin over the last year. The only other news they’ve published were their announcements regarding the drilling of this same hole. Like many junior miners, they appear to be in a holding pattern – conserving cash while they wait for the market to recover and investment capital to once again become available. Either that or they just really like talking about that hole. If so, maybe it’s time to move on. 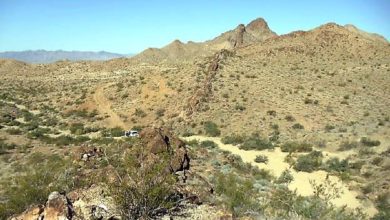 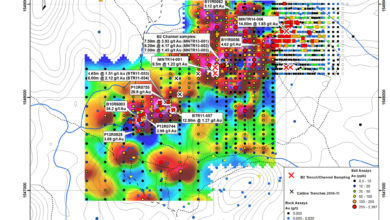 Calibre Stays in the News with More Trench Assay Results