The Ox Fault appears to have cut through the deposit and moved the eastern half elsewhere. On the eastern side of the fault a small arcuate mineralized zone is evident. Depending on whether the relative movement has been up, down or sideways this small zone may be just the “tip of an iceberg”.

VANCOUVER, BRITISH COLUMBIA–(Marketwired – Sept. 23, 2013) – Gold Reach Resources Ltd. (TSX VENTURE:GRV) (Gold Reach and/or the Company) is pleased to announce that assay results for holes Ox13-106 to 110 from the Ox deposit have been received. The Ox deposit is located 4 kilometres north-northeast of the Company’s West Seel discovery, and both deposits occur on the Company’s 100% owned Ootsa Property located adjacent to the producing Huckleberry Mine south of Smithers, British Columbia.

We’ve provided a couple of location maps for the Ootsa property, which includes the Ox deposit.
The Ox deposit is a crescent-shaped zone of disseminated and vein-controlled porphyry Cu mineralization. Deposits such as these are well sought after for their low to moderate grade high-tonnage ores.
In the Ox deposit the main sulfide minerals include pyrite an iron sulfide, chalcopyrite a copper-iron sulfide and molybdenite a molybdenum sulfide. These are contained within heat affected rocks near the western margin of a granitoid porphyry body.

Typically, porphyry deposits consist of concentric shells of altered and mineralized rock on the flanks of a low grade or barren core. The Ox Fault appears to have cut through the deposit and moved the eastern half elsewhere. On the eastern side of the fault a small arcuate mineralized zone is evident. Depending on whether the relative movement has been up, down or sideways this small zone may be just the “tip of an iceberg”. Some movement along the Damascus Fault is evident as minor displacement of the northern segment of the deposit.

The big question for the project geologist should be: Where is the other half of the deposit?

“Copper equivalent” is calculated using baseline commodity prices and generally assumes a 100% recovery rate. Let’s ignore these “highlights” and decide for ourselves what the highlights are.
In the upper levels of copper ore deposits, a process called supergene enrichment creates higher grade ores as percolating rainwater interacts with the ore minerals. This is why the highest grades are occurring closest to the surface. The mineral makeup of these enriched zones tends to be different from the primary ore, so they will require different methods for extracting the ore minerals.

Perhaps it would’ve been better to use the word “shell” rather than “core” in the above paragraph. The core of porphyry systems tend to be composed of low grade or barren material. Gold Reach is probably referring to one of the high grade ore shells which typically exist on the margins of porphyry systems. What has been extensively drilled is the western high grade shell. An eastern ore shell could exist but may have been moved elsewhere by movement along the Ox Fault.

What really sticks in the drill results are the consistency of the copper grades and the potentially wide zones. However, don’t get too excited as Gold Reach hasn’t estimated the true widths (thicknesses) of the mineralized intervals yet. In addition, their copper equivalent calculations are strongly dependent on market prices and assume 100% recovery rates.

*Width refers to drill hole intercepts, true widths have not been determined.
**Cu Eq. (copper equivalent) has been used to express the combined value of copper, molybdenum, gold and silver as a percentage of copper, and is provided for illustrative purposes only. No allowances have been made for recovery losses that may occur should mining eventually result. Calculations use metal prices of US $2.50/lb copper, $1200/oz gold, $15 silver, and $10/lb molybdenum using the formula Cu Eq.% = Cu% + (Au g/t x 0.701) + (Ag g/t x 0.0087) + (Mo% x 4.01).

Grades above 1% copper with high tonnage are normally the target for ensuring profitable copper mines. One good thing though is that the copper grades at Ox are still quite reasonable and consistent. If the ore minerals can be separated and concentrated economically, then they may be able to make money from this deposit. I don’t believe the Ox deposit can be marketed on the basis of its contained molybdenum alone. There are many more deposits of molybdenum around the world which surpass this one. For example, the Merlin deposit in northern Australia is the highest grade molybdenum deposit in the world. It has 13 million tonnes @ 0.8% molybdenum, 14 g/t rhenium, 0.2% copper and 4.8 g/t silver, and it hasn’t even been mined yet due to the current low molybdenum price. Realistically, the gold, silver and molybdenum grades within the Ox deposit are quite low and are merely used as credits to make the copper equivalent figure higher. Besides, these extra commodities may not be easily extracted and may be lost, so when it comes to the crunch they may not have any value at all.

Dr. Shane Ebert, president of Gold Reach, commented: “Infill and step out drilling at Ox continues to intersect strong grades within a continuous near surface zone of mineralization. The Company is extremely pleased with the advances made at the Ox deposit this year and we look forward to further advancing the deposit through metallurgical test work and a pit constrained resource update expected later in the year.”

Additional information is available on our website at www.goldreachresources.com.

Gold Reach Resources Ltd. has made an important new and strategic Copper Gold Molybdenum discovery on its 100% held Ootsa Property located adjacent to the 16,000 tonne per day Huckleberry Mine currently producing Cu Au and Mo in central BC.

Below the “cut off” grade it no longer becomes economically viable to mine the ore. Let’s put the Ox and Seel deposits into perspective with a world class copper deposit, for example Carapateena in South Australia. This IOCG deposit has 203 million tonnes of ore grading at 1.31% copper, 0.56g/t gold and is still only partially explored. The best drilling results to date from Carapateena include 905 metre at 2.1% copper and 1.0 g/t gold. Just remember grade is king!

All drill core is logged, photographed, and cut in half with a diamond saw. Half of the core is bagged and sent to AGAT Laboratories for analysis (which is an ISO 9001 and ISO/IEC 17025 certified lab), while the other half is archived and stored on site for verification and reference purposes. Gold is assayed by standard fire assay methods with 45 additional elements analyzed by Induced Coupled Plasma (ICP) utilizing a 4-acid digestion. Duplicate samples, blanks, and certified standards are included with every sample batch and then checked to ensure proper quality assurance and quality control.

This is pretty much a stock standard QA/QC statement seen in most company press releases. A link to a downloadable document file with more information on their QA/QC program would be useful here.

Dr. Shane Ebert, P.Geo., President of the Company, is the Qualified Person for the Ootsa project as defined by National Instrument 43-101 and has approved the technical disclosure contained in this news release. 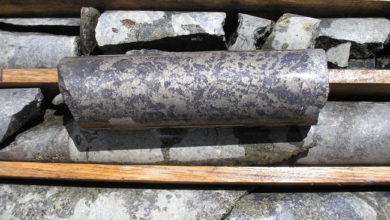 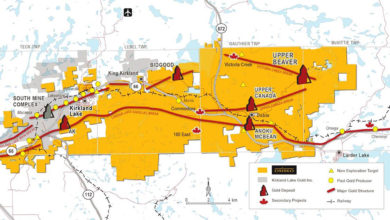