In Grasberg Part 1 we discussed the social and cultural aspects of the Grasberg deposit and outlined it’s long and fascinating history. In this article we’ll dig into the geology of this deposit.

The first striking fact is how young the deposit is. The mountain spine of New Guinea formed in the Middle Miocene and is less than 12 Million years old. The deposit itself is 3 million years old. We know that porphyry copper deposits generally form at 3-4 kilometers (~2 miles) at depth, which implies some 3,000-4,000 meters of erosion in little over 2 million years (given that deposits can take up to 1,000,000 years to form). This due to the extremely rapid movement of the Pacific and Australian plates (100 km per 1 million years) which are colliding and crushing a series of smaller plates (micro plates) together.  Prior to that time the entire area was a deep to shallow ocean basin with thick sequences of “clastic” (sand/silt/mud) sediment and carbonates (e.g. limestone) deposited from the Triassic to Early Miocene. In the Grasberg area the carbonates and other sedimentary rocks play a critical role in controlling the nature and style of mineralization.

Mineralization in New Guinea is controlled by the conjunction of long orogen parallel thrust faults, and cross cutting transform faults. These serve to localize intrusions and channel the mineralizing fluids into distinct regional corridors. Also these mega structures are long lived and can be tied back in some cases to the Pre-Cambrian basement of the orogenic belt.

In the Grasberg area, the oceanic geology (Cretaceous clastic sediments, and Paleocene – Miocene Limestone) has been tilted vertically and thrust 5,000 meters (about 3 miles) above sea level, with relatively minor regional metamorphism.  The main metamorphism is associated with the intrusion of a series of young (3.3-2.8 Million year) magma bodies associated with the Grasberg Intrusive Complex (GIC). Essentially a single volcano, the GIC consists of a series of plutons, dikes, diatremes and plugs in discrete area. There is a second main intrusion, the Ertsberg is a large body of micordiorite, that has been eroded further than the GIC, exposing a deeper level of the intrusion.

The immense size and richness of the GIC and Ertsberg is a function of repeated intrusion by igneous rock in the same area over a period of 1 million years. This repeated hydrothermal activity stripped and transported copper and gold from the surrounding rocks and concentrated these elements within the top of the magma chambers where they were focused into the volcanic vents and along regional structures that formed the porphyry and skarn deposits. This was hot water, between 550-700 degrees Celsius, and highly saline (70% NaCl Equivalent), which is an excellent host for copper and gold. Another critical factor is the presence of sedimentary anhydrite (calcium sulfate) nodules which provided the sulfur (to create the sulfides) and some of the salt to the fluids.

At the GIC the mineralization is related to the early potassic (biotite-magnetite-quartz-orthoclase) alteration, the later texturally destructive phyllic(sericite-pyrite-quartz), followed by a third

Unusually, there is a large skarn component directly associated with the porphyry and it includes a 100 metre zone of massive sulfide extending into the carbonate rocks. Mineralization at the GIC has been traced to 1,000 metres below surface. At Ertsberg the porphyry component is  similar to the GIC with a high temperature feldspar-biotite-magnetite core and a later sericite-pyrite-anhydrite-quartz overprint with the Cu-Au mineralization hosted in early and late Bornite and chalcopyrite (both copper-iron sulfides). The major Cu-Au-Ag skarns associated with the Ertsberg  intrusion, have a simple magnetite-bornite-chalcopyrite economic mineral assemblage with minor electrum (a natural gold-silver alloy) and trace covellite, but have a more complex alteration assemblage reflecting the different phases of alteration that occurred during increases and decreases in heat and burial. The dominant alteration types are magnesian to calc-silicate skarn alteration with garnet, pyroxene, diopside, calcite, anhydrite and forsterite being common prograde minerals. Retrograde minerals assemblages include talc-phlogopite, and chlorite-epidote-serpentinite.

An interesting side effect of the skarn mineralization is that it hardened the rock by hornfels contact metmorphism, so as erosion removed the softer limestones, the heat-hardened skarn rock literally stuck out like a sore thumb.

As with all big deposits, a lot went right at Grasberg. Large, long lived faults were present and formed channels for later intrusions to come to the surface. The intrusions were long lived and had repeated phases of reactivation, the sedimentary rocks were good hosts and contributed metal and sulfur which dramatically increased the fertility of the deposits. Rapid plate movement brought the deposit to the surface and then glaciation removed the softer rock exposing the mineralization on the surface. In many cases there is one or two of these elements but not all and that can make or break a deposit. 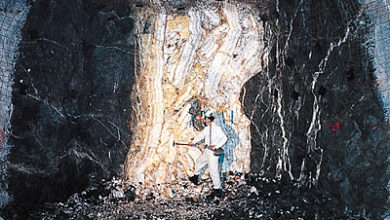