Deep in the green hills of Southern Kyushu, Japan, on the edge of ridge is one of the great gold mines of the world. While, not the biggest or the best Hishikari is a world class deposit as it reliably has an average grade of 40 g/t Gold and has produced a spectacular 6.2 Million ounces of gold from 3.9 Million tonnes of ore, and has a reserve of 4.8 Million ounces in 3.5 Million tonnes which easily puts it into the highest average grade deposit being actively mined.  The story of it’s discovery is the story of a targeted, and methodical exploration program which lead to this world class discovery.

Gold mining is recorded to have started in Japan 750 AD from placer deposits, and in the Hishikari area, the first workings date from 1750. However it wasn’t until 1975 that serious exploration began by the Metal Mining Agency of Japan, which used regional geological mapping, followed by geochemical and geophysical surveying to delineate a series of targets focused on paired series of high gravity anomaly-low resistivity anomalies. When they were initially drilled they intercepted high grade, but very narrow gold veins. In the later 1970’s the further drilling intercepted more high grade gold vein intercepts but it wasn’t until 1981 when the Metal Mining Agency drilled 15cm of 200 g/t Gold over 200 metres at depth.

Like much of Japan there is an abundance of hotsprings related to the abundance of modern volcanism in the Hishikari region. These hotsprings are related to emplacement of a Magma chamber at depth which also is the driving source for the mineralization. The regional geology is a young ~1,000,000 year old volcanic sequence that overlies a Cretaceous shale sequence, with the gap between the two known as an unconformity. This unconformity plays a critical role in the formation of the deposit.

The deposit is unusual in that it is composed of 125 separate veins clustered in distinct systems aligned an intersection of SW-NE structure and N-S structures. The veins which average 1-3 metres wide are hosted in a “corridor” of alteration that is 500 – 1000m wide and ~3 kilometres long. The veins are banded quartz-adularia ( a low temperature pink feldspar mineral), and quartz-clay with extremely high grade >1000 g/t Gold mineralization in what are termed “Ginguro” or Silver-Black bands which are thin bands composed of electrum, chalcopyrite, galena and sphalerite. The mineralization does note outcrop at surface but starts 100 metres down, with the bulk of the mineralization occurring at the contact between the Pleistocene volcanics and the Cretaceous shales

The deposit formed at contact between the underlying shales and volcanics, because as the older shales were deformed by the magma and domed, they fractured forming the space for the veins to form, while the more recent volcanics deformed plastically (meaning they did not fracture leaving space for the veins to form) so mineralization was concentrated at the contact between the two leading to the extrodinarily high grades within a 100 metre interval. 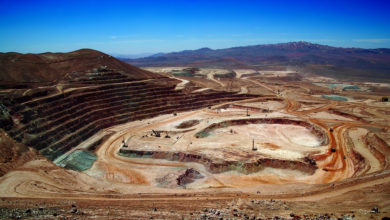