Since the team at Fission 3.0 was involved in the PLS discovery they may have some bragging rights, but the company’s miss at their PLN property is a reminder that exploration is just that – exploration.

KELOWNA, BRITISH COLUMBIA–(Marketwired – Oct. 15, 2014) – FISSION 3.0 CORP. (TSX VENTURE:FUU) (“Fission 3” or “the Company“) and its Joint Venture (JV) partner, Brades Resource, (TSX VENTURE:BRA), are pleased to announce a Fall exploration program at their Clearwater West property in Saskatchewan’s Athabasca Basin. The program is a follow up to the radiometric anomalies identified by Fission 3.0’s patent-pending Airborne Radiometric Survey (see NR May 27th 2014), including a large cluster of anomalies by the Clearwater/PLS boundary – interpreted to be a possible uranium boulder train or outcrop. Of note, it was Fission Uranium’s airborne radiometric survey that led to the discovery of its uranium boulder field, which in turn led to the major high-grade, shallow-depth discovery that PLS now hosts.

The last time we talked about Fission 3.0 they were reporting some rather disappointing results from their Patterson Lake North (PLN) property just north of Fission Uranium’s high grade PLS discovery in Saskatchewan’s Athabasca Basin.  This time we are discussing another of Fission 3.0’s prospects, Clearwater West – which borders the south end of Fission’s PLS.

The program will consist of mapping, prospecting and a DC resistivity survey to prioritize future drill testing. The anomalies being targeted for follow up are located near the Clearwater West/Patterson Lake South border. Of particular note, Fission Uranium recently intersected uranium mineralization just 330m from the same border.

The mapping and prospecting program is designed to follow-up on an airborne geophysical survey which identified some radioactive anomalies in the area. The anomaly is believed to be either a uranium-rich bedrock outcrop, or (more likely) a cluster of uranium-rich boulders. In areas that have been glaciated, following trails of mineralized boulders along the direction of ice flow is a common prospecting technique. If the company can identify a boulder “train” and correctly interpret the ice flow history in the area, they may be able to trace the boulders to a source of uranium-rich bedrock.

The terms “down-ice” and “up-ice” refer to the interpreted direction of glacier movement in the area.

Previous electro-magnetic surveys identified electrically conductive rock units which coincide with radiometric anomalies identified from their more recent survey. The company plans to use a ground-based resistivity survey to help identify sub-surface faulting and structural offsets which may have been acted as conduits for uranium-bearing hydrothermal fluids.

“The recent airborne surveys at Clearwater West discovered strong radiometric anomalies near Fission Uranium’s PLS property. These include a large cluster of results that may represent a uranium boulder train or outcrop. It was the discovery of a large anomaly cluster at PLS that led to the high grade uranium boulder field and from there to the high-grade discovery in basement rock at PLS. Just 330m from the PLS/Clearwater border, Fission Uranium has already hit anomalous radiometric results in drill-hole PLS14-255. This Fall program is an important next step in exploration as we work towards defining drill targets.”

Summary of the Clearwater West Project

Fission 3’s experienced and successful management and technical team, with a track record of two major high-grade uranium discoveries in the Athabasca Basin region in the past three years (Waterbury Lake project and the PLS project), operates and manages Clearwater West. Fission 3 currently holds a 100% interest in Clearwater West.

Brades has entered into a 3-year option to acquire up to a 50% interest in Clearwater West by incurring $5,000,000 of staged exploration expenditures on or before October 14, 2016. Year One minimum exploration requirement is $0.7M. Fission 3.0 is the operator and project manager.

The Athabasca Basin region hosts the world’s richest uranium deposits, with a well-established and politically stable, uranium exploration and mining sector. Fission 3 and Brades consider the recent discovery of high-grade uranium in the southwestern region of the Athabasca Basin to demonstrate the prospective merit of this under-explored area.

No junior miner could end a news release without comparing themselves to the latest big discovery in their area. Since the team at Fission 3.0 was involved in the PLS discovery they may have some bragging rights, but the company’s miss at their PLN property is a reminder that exploration is just that – exploration. Neighbors aside, Clearwater West is simply a uranium prospect.

Clearwater West is an early stage exploration project prospective for hosting high-grade uranium mineralization. Such mineralization is structurally controlled and typically associated with basement graphitic shear zones within clay altered metasedimentary basement lithologies. These features have unique characteristics that can be identified by various geophysical surveys. The property covers historic airborne EM anomalies, which could be the extensions of the EM conductors identified on the PLS property immediately to the north.

The technical information in this news release has been prepared in accordance with the Canadian regulatory requirements set out in National Instrument 43-101 and reviewed on behalf of the company by Ross McElroy, P.Geol., Chief Geologist and COO for Fission 3.0 Corp., a qualified person.

Fission 3.0 is currently trading at their one year low of $0.065 down from their high of $0.22 in December 2013. Like most uranium stocks (and most mining stocks) they’ve taken a beating over the last few months.

Fission 3.0 Corp. is a Canadian-based resource company specializing in the strategic acquisition, exploration and development of uranium properties and is headquartered in Kelowna, British Columbia. Common Shares are listed on the TSX Venture Exchange under the symbol “FUU”. 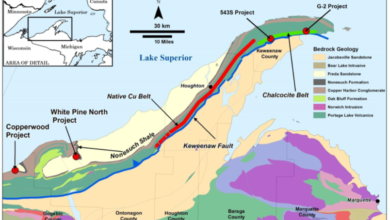