In some cases, however, a historical result is reconfirmed for the sole purpose of producing some guaranteed good news. Sending out a couple of guys to cut a channel across a mineralized zone was a sure fire way to produce some good news and could help reinvigorate the project.

VANCOUVER, BRITISH COLUMBIA–(Marketwired – Nov. 11, 2013) – Tarsis Resources Ltd. (TSX VENTURE:TCC) (“Tarsis” and “the Company”) is pleased to announce assay results from its road accessible Tim property, located in southern Yukon. During September 2013, a short, focused work program was conducted to re-evaluate an historical zone of silver-lead rich Carbonate Replacement Mineralization (CRM) exposed by mechanized trenching in 1988. Historical chip sampling across the zone reportedly returned 352 g/t silver and 9.12% lead across 4.00 m. In addition to this exposure, similar mineralization was also reported in adjacent trenches 180 and 250 m on either side of the central trench and no drill testing has ever been undertaken on this zone.

Tarsis is a company focused on early stage exploration and this project is most definitely an early-stage project. A map of the location is below. The fact that the property is road accessible is a big plus, especially for a northern project.

Tarsis’ field crew relocated the central historical trench (T-3) and exposed the main mineralized showing with the use of hand tools. A total of 6.4 m of footwall alteration and CRM were exposed at the base of the trench. Three series of sawn channel samples were taken across the exposure at approximately 1 m spacing between channels. The central channel tested a partial exposure of footwall alteration and the CRM while the outer channels only tested the partially exposed CRM. Weighted average assays for each of the channel series are shown below.

Carbonate Replacement Deposits (“CRD”) occur when metal rich igneous intrusions and associated fluids invade existing carbonate rocks (e.g. limestone). Many of the historic silver deposits in Mexico are CRD-type deposits. The interaction with the heat of the rising magma and the carbonate rocks can produce a calcium-bearing silicate rock often referred to as a “skarn”.

Channel sampling involves cutting a channel across an exposed rock outcrop using a rock saw, while trenching often involves the literal blasting of a small pit in the ground in order to expose shallow mineralization. Many early prospectors employed trenching and old trenches are often used by modern exploration teams. In this case, Tarsis is re-sampling an old trench. There are a few reasons why a company might do this, but we’ll address those a little further on.

Elevated accessory elements in the mineralized zone include zinc, arsenic, antimony, bismuth, indium, gold and tin. Gold values in particular were elevated between 200 and 700 ppb and indium values range from 1.5 ppm to 500ppm with an average of 225 ppm. All zinc assays were <1% likely due to near surface leaching.

The CRM at this particular locale is hosted within a steep southeasterly dipping structural zone and is dominantly comprised of manganiferous iron carbonate and porous dark brown limonite. Hand trenching did not expose the hangingwall contact of the mineralized zone due to slough and extensive downslope cover.

Historical soil geochemical response defines three distinct linear northwest trending silver-lead anomalies, each of which is continuously defined for a strike length of roughly 2,000 m. All historical trenching was conducted along the trace of the central geochemical anomaly but the soil sample coverage was not completed over the mineralized zone encountered in trench T-3 or northwest along strike.

The Tim property was initially staked in 1983 to cover silver-lead-zinc stream sediment geochemical anomalies and a favourable geological environment with potential for carbonate-hosted mineralization similar to that at the nearby Midway/Silvertip project owned by Silvercorp Metals Inc.

Soil sampling, stream sediment sampling, geophysical surveys and trenching were carried out during the 1980’s; however the property was not drill tested at that time.

Tarsis acquired the property in 2007 and subsequently optioned it to International KRL Resources (now Acme Resources Inc.) which carried out a limited five hole diamond drill program in 2008, largely targeting Induced Polarization geophysical anomalies. The nearest drill hole to the central trench T-3 mentioned above is located roughly 520 m away and was drilled parallel to the interpreted downdip orientation of the mineralized zone.

While Tarsis tells us above that this particular zone has not been drill-tested, the property itself has been drilled. Tarsis optioned it off to Acme Resources who drilled it based on some IP (Induced Polarization) targets and came up with nothing. Tarsis believes that Acme screwed up and drilled parallel to the target (“parallel to the interpreted downdip orientation”) without intersecting it. This is entirely possible. Many companies are eager to drill and often do so without careful analysis of the property geology. However, we have no way of knowing this without looking at the data.

Optioning of a property is a good way of getting work performed on a property and advancing a project without paying for it. The downside of optioning is that if the optioning company doesn’t find anything, their work can essentially kill your project. They get to walk away, but the property owner is left with the fallout. Acme’s poor results likely left Tarsus with nowhere to go on the project.

This takes us back to the channel sampling. Why would a company re-sample old results?

Old assessment reports are often missing information such as complete assays or detailed logs. Old reports are also typically pre-GPS meaning that maps are not always accurate. In nearly all cases, the original samples or drill core are missing. A company will often re-confirm an old result in order to ensure that the reports are accurate.

In some cases, however, a historical result is reconfirmed for the sole purpose of producing some guaranteed good news. Sending out a couple of guys to cut a channel across a mineralized zone was a sure fire way to produce some good news for Tarsis and could help them reinvigorate the Tim project. That they changed the name back to “Tim” after it was branded as the “Wolf Project” is perhaps further evidence that they are looking for a do-over.

Based on the soil geochem and the presence of mineralized outcrop there is a lot to get excited about here, but unfortunately Tarsis has to carry the bad news with them on this project. If they do find someone to invest in their Tim project I suspect they’ll be a lot more careful about what work is done.

Sawn samples were approximately 4 cm in width, resulting in relatively large samples per interval, which the Company believes improves the reliability of the sampling. Samples were delivered to ALS Minerals in Whitehorse, Yukon for sample preparation and all analyses were completed in North Vancouver. Silver and 50 other elements were analysed using ICPMS techniques.

The technical information contained in this press release was prepared under the supervision of Mr. Marc G. Blythe, P.Eng., the President and CEO of Tarsis Resources Ltd. Mr. Blythe is a Qualified Person as defined by NI 43-101.

Tarsis is an exploration company following the prospect generator business model. The Company acquires prospective exploration projects by acquisition or through its own grass roots generative exploration, adds value and then vends or options out projects to partners for advancement.

On behalf of the Board, 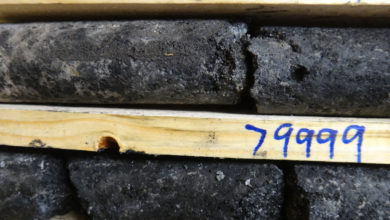