It would be good to see a map of the airborne survey results and interpreted grades here. At this stage, we can only trust what Fission Uranium Corp. is saying.

Disclaimer: This is an editorial review of a public press release and not an endorsement. It may include opinions or points of view that may not be shared by the companies mentioned in the release. The editorial comments are highlighted so as to be easily separated from the release text and portions of the release not affecting this review may be deleted. Please view original release here.

KELOWNA, BRITISH COLUMBIA–(Marketwired – Aug. 29, 2013) – FISSION URANIUM CORP. (TSX VENTURE:FCU)(OTCQX:FCUUF)(FRANKFURT:2FU) (‘Fission‘ or ‘the Company‘) is pleased to announce the discovery of two significant and strongly radioactive uranium source anomalous regions on its 100% owned North Shore property in the Athabasca Basin, Alberta. The Northern and Southern anomalies occur within the south-central part of the project area near the southern boundary. The discovery was made using Fission and Special Project Inc’s (‘SPI’) high resolution magnetic and radiometric airborne survey technology which is currently patent-pending (see news release July 16, 2013).

The map below is from the original press release on Fission Uranium Corp’s website. It shows that Fission Uranium appears to be chasing uranium shows along strike from Cameco’s Maurice Bay Uranium Deposit.  The exploration targets include unconformity type and basement hosted mineralization. The main area of interest is along the NW margin of the Athabasca Basin (Alberta), approximately 10 km SW of Cameco’s deposit, which has a historical resource of 1.5 million pounds uranium grading 0.6% uranium oxide (U3O8).

The Northern anomalous region occurs within a 1.5km x 0.5km area and contains several parallel trends up to 300m. The Southern anomaly is located approximately 7km to the SW of the northern anomaly and is characterized by being narrow (1 to 10m wide) and can be traced for up to 3km.

‘We are very encouraged by this strongly radioactive discovery, particularly as we used the same technology to locate the boulder field at Patterson Lake South (PLS). While the expansion of our PLS discovery is our main task, following up these new results at our North Shore property is also a priority.‘

In August 2013, using a fixed wing aircraft, SPI flew a 12,257 line km high resolution airborne magnetic and radiometric survey at 50m line spacing over the entire North Shore project. The radiometric system uses a calibrated gamma spectrometer which is able to differentiate between uranium, thorium and potassium and also determine the relative concentration of each element.

We have written an article about airborne geophysical methods. It provides a brief overview of aeromagnetic and radiometric surveys.

The radiometric data was collected and processed and anomalies were picked based on elevated total counts with correlated elevated uranium concentrations. The width and responses of the peaks indicate that some of the larger anomalies present are likely to be part of the outcrop/sub crop as opposed to boulders. This is indicated by a generally wider anomaly which is easily seen on multiple lines.

It would be good to see a map of the airborne survey results and interpreted grades here. At this stage, we can only trust what Fission Uranium Corp. is saying about this discovery.

Further compilation of the data will be completed and a field program to follow-up the anomalies on the ground by mapping and prospecting is planned.

About the Fission/SPI Patent Pending System And Method For Aerial Surveying Or Mapping Of Radioactive Deposits. The invention relates to an airborne system and method for surveying a geographic area to detect and map the locations of radioactive geological deposits, such as boulders and clusters of rock. The Fission/SPI invention utilizes a fixed wing aircraft using at least one radiation detector element to fly at an ideal height and speed over a geographic area and store the radioactive signal data.

The North Shore Property is situated along the northwest margin of the Athabasca Basin. A high resolution magnetic and electromagnetic (VTEM) survey and a seven hole drill program totalling 1,260 m. were completed during the 2007-2008 winter season. The exploration program successfully identified a significant hydrothermal system associated with a major northeast trending structure. Strong alteration and radioactivity were intersected along this structure at downhole depths up to 185 m, with widths ranging from less than one meter to 8.5 meters. The basement hosted altered zones contained highly anomalous concentrations of geochemical pathfinders, and included uranium values ranging as high as 70.5 ppm U. These results are very encouraging at this early stage of exploration.

Read our article about the VTEM method here.
When it comes to uranium exploration, grades of 1000 ppm (0.1% U3O8) or more are generally required to get most investors excited. At his early stage the company is basically following the trail of radioactive breadcrumbs in order to find out if it leads to something more substantial.

The technical information in this news release has been prepared in accordance with the Canadian regulatory requirements set out in National Instrument 43- 101 and reviewed on behalf of the company by Ross McElroy, P.Geol. President and COO for Fission Uranium Corp., a qualified person. 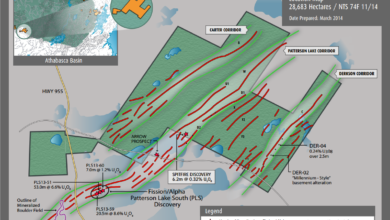 Purepoint Explores for Elusive Uranium in the Athabasca Basin