Phosphate is a basic ingredient for some proteins and is important in the development of bones and teeth in animals. It is also essential in the growth of plants. Phosphate is one of three essential nutrients (Nitrogen-Phosphorus and Potassium) in the production of fertilizer. This has made phosphate a sought after commodity over the recent years as population growth and climate change accelerate the need to sustain the world’s food supply. Ninety percent of phosphate mined today is used for producing fertilizer. Potassium, another important fertilizer ingredient is mined as Potash.

Phosphates are an inorganic chemical consisting of phosphorous and oxygen (PO4-3) which commonly pairs with calcium to form the mineral apatite (Ca5(PO4)3(F,Cl,OH)).

Apatite group minerals may contain a variety of other elements such as fluorine, chlorine and REE’s (Rare Earth Elements). In fact, in some REE deposits the host mineral is apatite. Bones and teeth are composed of the hydroxyapatite (Ca5(PO4)3(OH)) and fluoride rinses to prevent tooth decay are designed to encourage the substitution of the hydroxy group (OH) anions for flouride (F) resulting in the harder and more acid-resistant fluoroapatite teeth. Apatite may also contain uranium, lead and thorium which makes it useful for the age dating of rocks. Igneous apatite occurs in a variety of colours and may sometimes occur in gem-quality crystals.

Economic phosphate deposits are typically created through sedimentary processes and the ore rock is typically referred to as phosphorite or phosphate rock.

The black phosphorite beds in the Bone Valley region of Florida were the first marine phosphorites discovered and are the largest in the United States. They have been mined continuously since the 1880’s.

Economic phosphate may also occur as guano (bird or bat droppings) and the earliest phosphate mines were of this type. Discovered in the 1800’s, these deposits were formed from large accumulations of sea bird and cave dwelling bat droppings. Their strategic importance played a role in international conflicts between Chile, Peru and Spain including land-grabbing and the claiming of guano deposits.

The small South Pacific island of Nauru notoriously strip mined its guano deposits creating great wealth for the residents and destroying destroyed over 80% of surface land in the process.

Sedimentary phosphorites of marine origin are the most important phosphate deposits, but guano phosphate rock and even contemporary guano (modern bat droppings) are currently mined. Sedimentary phosphate deposits occur near shore, shallow marine environments along the continental shelf. As such most deposits are located along ancient (and modern) coast lines. Gunao-type deposits are more common along coastlines and on islands.

Most mining is by open pits and strip mining and the rock requires little processing other the the removal of the non-phosphate bearing rock and other impurities. This process involves crushing and separating impurities (sediment, bones and shells) from the phosphate rock. The separation process can increase grades from 5-7% P2O5 to higher grades of 27 to 36% P2O5. In some cases, where high grade phosphate rock is mined, no separation is required and the crushed raw material is shipped directly to market.

The Phosphoric Acid can contain low amounts radiation due to radioactive elements within the subsurface prior to extraction. Proper environmental and health measures are needed throughout the process to ensure the safety of the workers and the general public.

While not particularly rare, large quantities of phosphate are used in agriculture and world production has increased every year. 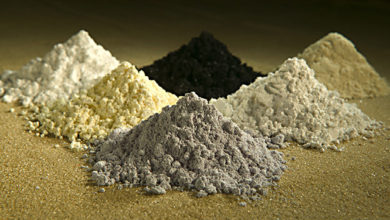 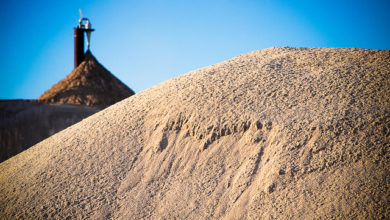 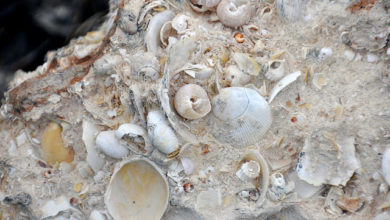