While BC is a considered to a be a relatively stable and mining friendly jurisdiction, they have strict regulatory requirements for miners – most of which were developed in response to the poor conduct of mining companies in the past. North Bay Resources is attempting to pro-actively address environmental and heritage issues on their property.

SKIPPACK, PA–(Marketwired – May 15, 2014) – North Bay Resources Inc. (OTCQB: NBRI) (“North Bay” or the “Company”) is pleased to issue the following update on our near-term mining projects and exploration properties in British Columbia, Canada.

With the exception of the Fraser River Project, our Canadian projects have been on hold of late as the Company has been focusing on getting the Ruby Mine in California into production. With the Ruby continuing to advance forward, and in view of the upcoming spinoff of our wholly-owned subsidiary, Ruby Gold, Inc., as a separate independent company, we are now making plans to resume work on some of our many projects in Canada, as well as to pursue several other transactional opportunities that have presented themselves recently.

A site survey conducted for the recently-announced Heritage Impact Assessment (“HIA”) on our Fraser River Project near Lytton, BC was completed on April 11. The remaining HIA work consists of compiling research and interviews prior to the issuance of the final report. As detailed in the Company press release on March 18, 2014, the HIA is being conducted by Golder Associates Ltd., and is being led by Dr. Christopher Andreae, Ph.D., CAHP. A mining permit for the Fraser River Project was issued in 2013, and mining operations are expected to resume this summer pending the results from the HIA study. The Fraser River Project area covers approximately 4.5 kilometers of placer claims along the Fraser River. Recent assessments indicate assays up to 5.68 grams per tonne gold and 0.427 grams per tonne platinum.

This news is a bit of a departure for us. First, the company is focused on placer mining. Second, the company is only listed on the US-based OTC market. While we have nothing against either, companies like this don’t often pop up on our news radar. Let’s have a look.

North Bay Resources is a junior exploration company based out of the United States who are primarily focused on placer mining projects. Their flagship project “Ruby Mine” is an underground placer gold mine located in in Northern California approximately 60 km west of Reno, NV, USA which they are currently rehabilitating for possible production. Aside from their two California based projects, the Ruby Mine and the associated “Carson Mine”, they have 23 properties located in BC, Canada.

The Company is preparing to move forward with our Monte Cristo placer project in the Lillooet River Valley near Harrison Lake, BC. An exploration program conducted in 2012 resulted in assays as high as 5.70 g/t gold, 3.26 g/t silver, and 0.067 g/t platinum. Drawing on our recent experience at the Fraser River Project with the current regulatory climate in BC, we are planning to commission an Archeological Overview Assessment (“AOA”) at Monte Cristo prior to finalizing our mining plan and filing for our mining permits. By doing so we hope to avoid any delays during the permitting process related to any areas of archeological or historical significance that may or may not be present on the Monte Cristo property.

Pre-feasibility and feasibility studies are typical milestones in the advancement of mineral deposits. These studies essentially ask one key question: Can the resource be extracted for a profit? But before economic feasibility is considered another question must be asked: Can a mine be opened at all? Depending on the jurisdiction, answering that question involves the examination of political, security and environmental considerations.

In the case of North Bay Resources, the process of opening a mine in the province of BC, Canada involves an Environmental and Heritage Impact Assessments (EIA, HIA). While BC is a considered to a be a relatively stable and mining friendly jurisdiction, they have strict regulatory requirements for miners – most of which were developed in response to the poor conduct of mining companies in the past.  The spotty history of mining operations in BC resulted in strong public sentiment against mine development and for several years few projects got off the ground.  This sentiment helped create strict regulations for mine development within the province. It wasn’t until recent institutional change and a growing need to drive the BC economy that mines have finally started to move into production. These mines are required to ensure they are diligent when it comes to reducing their environmental impact. In the case of North Bay Resources, they are attempting to pro-actively address environmental and heritage issues.

An Archaeological Overview Assessment (AOA) is a requirement and part of the application process to receive a permit of approval certificate by the BC government.

The Company is formulating plans to conduct processing operations on approximately 6,000 metric tons of mineralized material that was extracted in 2009 from the Domineer mine at Mt. Washington and stockpiled on the surface of our claims. In July 2010, a 168 metric ton portion of this bulk sample was assessed to yield an average grade of 51.53 grams (1.65 ounces) per tonne gold, 88.02 grams (2.83 ounces) per tonne silver, and over 1% copper. The historical resource estimate (not NI 43-101 compliant) of the Domineer gold deposit has previously been reported as 550,298 tonnes with an average grade of 6.75 g/t gold, 32.23 g/t silver and 0.57% copper (Source: BC Assessment Report 32514).

Although North Bay has properties in Canada, they are not listed on a Canadian exchange and are not required to file NI 43-101 compliant technical reports. While they required to adhere to provincial and federal regulations in regards to mine development and the maintenance of mineral rights, their regulatory reporting is governed by the OTC market requirements and U.S. Law.

The Brett Gold deposit adjacent to and within 500 meters of our Brett West property was recently sold by Running Fox Resource Corporation to Ximen Mining Corp. for a reported $1,565,000 in cash and stock. We believe our Brett West property, which also partially surrounds Brett Gold in addition to being adjacent to it, is either a continuation of the Brett Gold deposit, or else an entirely new gold deposit altogether. As previously reported in a Company press release dated October 25, 2013, a HMC program conducted by North Bay on our Brett West property resulted in an expansion and further delineation of the alteration zone found by the Company in 2011. The 2013 field work also resulted in the discovery of a completely new and previously undiscovered target area about 400 metres west from where a 95.6 grams (3.07 ounces) per tonne gold sample (NB-60) was located during our 2011 fieldwork. The 2013 HMC project produced new assays as high as 9.75 g/t gold from the original target area, and new and very positive results downslope from the newly discovered alteration zone, with three samples yielding 8.0 g/t, 2.29 g/t, and 2.53 g/t gold respectively. These samples were all taken very close together and point to a new target area upslope. Further exploration is planned to locate the origin of this gold dispersal plume, and to determine if Brett West is indeed related to and a continuation of the Brett Gold deposit, or an entirely new gold deposit.

The property surrounding our Willa 5 claim in the Slocan district of BC was recently sold by various vendors to Discovery Ventures Inc. (“DVN”) for a reported $3,600,000 in cash and 21,600,000 shares of DVN stock. With the exception of our Willa 5 claim, DVN now owns the Willa Mine. Our Willa 5 claim, which covers approximately 50 acres, is near the center of the Willa Mine property and is completely surrounded by what is now DVN’s tenure. Our Willa 5 claim also partially overlies the southeast portion of the Willa Mine’s underground workings. If the Willa Mine is successfully opened by DVN and any mining is undertaken to the southeast, we believe it must then proceed through our Willa 5 claim area. The Willa Mine’s total mineral resource estimate (historical, and not NI43-101 compliant) within the measured, indicated, and inferred categories combined and based on a 1.5-gram gold per tonne cutoff, is reported to be 3,989,494 tonnes grading 3.23 grams gold, 7.16 grams silver, and 0.53% copper. (Source: BC Assessment Report 33570).

With more than two dozen properties and not a lot of cash it’s not surprising that North Bay is focused on getting their 100% owned Ruby Mine on-line and producing. When this happens, the company plans to separate the Ruby Mine from North Bay by issuing a special dividend of Ruby Gold shares to current North Bay shareholders. This will leave North Bay with the remaining exploration properties.  At less than $0.02 per share it’s hard to imagine North Bay losing what value it has in the Ruby asset, but time will tell how they fare.

As time and funds permit, we will also endeavor to initiate new field work in 2014 on several other properties that have yet to be explored in depth, including Rachel Gold, near Salmo, BC, and Pine River Vanadium, near Mackenzie, BC. We will issue further updates as these projects move forward. 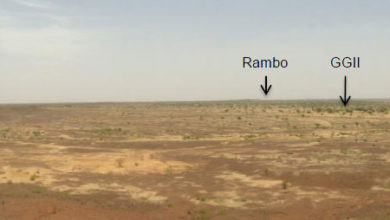 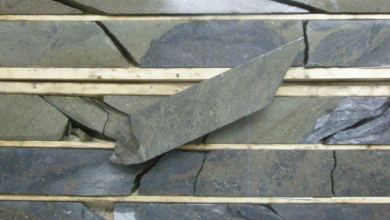