It appears the deposit was subject to a series of faulting events that displaced portions of the mineralized rock units. The question for the geologists to answer is: Where did the rest of the deposit go?

VANCOUVER, BRITISH COLUMBIA–(Marketwired – Jan. 6, 2014) – Gold Reach Resources Ltd. (TSX VENTURE:GRV) (Gold Reach and/or the Company) is pleased to announce that assay results for holes S13-170 to 177 from the East and West Seel deposits have been received. The East Seel deposit is located adjacent to the Company’s West Seel discovery, and both occur 4 kilometres south-southwest of the Company’s Ox deposit. All 3 deposits occur on the Company’s 100% owned Ootsa Property located adjacent to the producing Huckleberry copper Mine south of Smithers, British Columbia.

We’ve previously discussed Gold Reach’s Ox Project which is located only 4 km from the East and West Seel Projects and about the same distance from Imperial Metals’ Huckleberry Mine. The projects are all low grade porphyry copper deposits with minor gold, molybdenum and silver and together make up Gold Reach’s Ootsa Property.

When discussing grades in mixed metal deposits we often see the grade expressed as an “equivalent”. In this case, the grade is expressed as a copper equivalent. A copper equivalent calculation takes the value of all of the accessory metals such as gold and silver and combines them into a single number representing the equivalent value of a single metal. You can read more about this in our article on mining company drill results or try out our metal equivalent calculator.

The goal of the 2013 drilling program, which is now complete, was to infill and expand known zones of higher-grade near-surface mineralization at Ox, East Seel, and West Seel and the program has been very successful at achieving that goal. Results for 22 additional drill holes from the 2013 program are still pending.

The diagram above shows that the East and West Seel deposits are separated by a structural fault. The East Seel appears to be bound by two other faults. One of the principle jobs of a geologist is to de-construct the chain of events that lead to the emplacement of a mineralized system and effect it after emplacement. In  the case of the East and West Seel projects (and the Ox to the north) it appears the deposit was subject to a series of faulting events that displaced portions of the mineralized rock units. The question for the geologists is: Where did the rest of the deposit go?

Hole S13-175 was a vertical in-fill hole drilled on East Seel section 16 NE. The hole intersected mineralization in 5 closely spaced mineralized zones over a cumulative width of 153 metres. The intercepts are summarized in the table below.

Note the disclaimer which explains how the company calculated its copper equivalent. In early stage reporting equivalents generally assume a 100% metal recovery. Commodity prices must also be factored into the calculations and the prices used can effect the result dramatically, especially if the value of one or more commodities is over or under-weighted in the calculation.

What’s interesting about the East Seel results is that they contain almost no molybdenum. Compare that to West Seel, the Ox and the Huckleberry mine which all show consistent low-grade moly. The geology on either side of the West Seel fault is clearly different and further demonstrates that portions of the deposit have been physically displaced through fault movement. The cross-section diagrams below illustrate this more clearly.

Perhaps it would’ve been better to use the word “shell” rather than “high grade core” in the above paragraph. The core of porphyry systems tend to be composed of low grade or barren material. Gold Reach is probably referring to one of the high grade ore shells which typically exist on the margins of porphyry systems.

Compared to East Seel, the West Seel results are lower grade, but with much longer intervals and more consistent grades. The question is whether these grades could be considered economic. Grades above 1% are normally the target for a profitable for a open pit copper mine, however the nearby Huckleberry open pit copper mine has an average grade of 0.334% Cu  and 0.009% Mo with cut-off grades ranging from 0.15% to 0.20% Cu. If Huckleberry is the benchmark, then Gold Reach is looking pretty good.

The Ootsa property is an advanced stage exploration project containing the Seel and Ox porphyry systems both with compliant resource estimates open for expansion. The Company has completed 134,878 metres of core drilling on the property, with 36,135 meters completed during 2013. An updated resource for the Ox deposit is expected shortly and an updated resource on the Seel deposit is expected in the first quarter of 2014.

QA/QC is an important part of a drill program. Read about QA/QC for geochemical results.

All drill core is logged, photographed, and cut in half with a diamond saw. Half of the core is bagged and sent to AGAT Laboratories for analysis (which is an ISO 9001 and ISO/IEC 17025 certified lab), while the other half is archived and stored on site for verification and reference purposes. Gold is assayed by standard fire assay methods with 45 additional elements analyzed by Induced Coupled Plasma (ICP) utilizing a 4-acid digestion. Duplicate samples, blanks, and certified standards are included with every sample batch and then checked to ensure proper quality assurance and quality control. 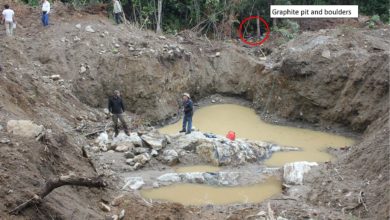