An exit strategy can be defined as: a means of leaving one’s current situation, either after a predetermined objective has been achieved, or as a strategy to mitigate failure.

To Mine, Or Not To Mine?

Identifying the exit strategies is also important for exploration companies. There are many different exit strategies and the right one usually comes down to the size of the company  and its available resources. Most junior exploration companies do not have a goal of opening a mine, that’s not their game. The skills required to identify a successful exploration prospect, are quite different to those required to design and operate a mine.

Alternatively, walking away too soon can also be a mistake. As geologists, one of the most frustrating parts of the job is a partially executed exploration plan, overseen by a jittery management team.

In contrast, a large company may have an exit strategy of not just finding, but developing and producing from a mine. The new mine may be the source of more ore for existing processing plants and be sold to existing customers.

An exit strategy should be included in the design of any new project. This is now standard practice in the industry. It works on the premise that, “You cannot know how to start a project if you do not know how to end it.” Often exit strategies  change and evolve as a project progresses. If a company operating a small mine that ships the ore out for processing discovers extensive new reserves, they may decide to build their own processing facility on site

A junior that is conducting exploration with the goal of finding an economic deposit may have a number of alternative exit strategies that don’t include developing a mine. They may aim to sell their prospect to a mining company. Or they may aim to simply option their property to other juniors with the goal of eventually proving up a saleable deposit. Smart companies will have several contingency plans.

A common problem among the junior exploration companies in knowing when to throw in the towel. While during challenging economic times it may be wise to wait out the market, waiting can cost a lot of money. A project that is only marginally economic during high times may not be worth hanging on to for the years it might take to once again become economic.

Alternatively, walking away too soon can also be a mistake. As geologists, one of the most frustrating parts of the job is a partially executed exploration plan, overseen by a jittery management team. There is a constant pressure to produce market-shaking results, and any results that aren’t stellar are met with panic. Patient and thoughtful companies can often benefit from picking up projects that have been abandoned by fair weather friends.

All of the above assumes success but an exit strategy can also used to “mitigate failure”. In mining, this usually involves knowing when a deposit either ceases to be economically viable or is not economic to begin with.

As the price of gold drops, more and more mines will be put onto a “care and maintenance” regime, not abandoned, but not producing. This is an example of a mitigation exit strategy. When the commodity price increases again, the mine will resume production. If the price stays low the mine may be sold if cash is required.

Finding an ore deposit is only a small portion of the battle, a number of other factors can sink a potential mine. So after a prefeasibility study fails does the company have an exit strategy that will reduce potential losses? After drilling numerous exploration holes into a potential deposit, but realizing that the mineral occurrence just isn’t large enough to be economically viable, does the company have the resolve to know when to move on? Or will they keep pouring money into a losing battle. These all have to do with having a comprehensive exit strategy that makes economic sense.

Exit Strategies and the Investor

As an investor, it’s critical to consider the company’s exit strategies and whether they fit with your investment goals.  It’s best if the company has multiple exit strategies so that even if everything doesn’t go exactly as planned the endeavour can be successfully and profitably brought to a close.

It’s also important to have your own exit strategy for an investment. Understanding where a project is in its life cycle and where you want to take your profits is part of that. Ideally a company has a good exit strategy and executes it diligently, but far too often this is not the case. Mines may be kept operating at a loss because it’s too expensive to shut them down. Juniors may hang onto uneconomic exploration projects because they don’t know what else to do. Dwindling cash or ore reserves, poor long term economics and poor exploration results are just a few of the vital signs that a project is on its last legs. Alternatively, prudent planning and well defined strategies may help companies to weather the worst of storms. 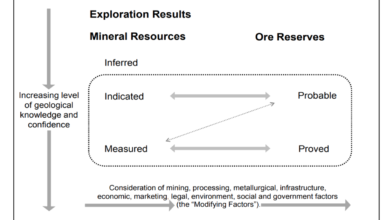